Mitsubishi Shipbuilding, a group company of Mitsubishi Heavy Industries, (MHI) based in Yokohama, held a christening ceremony for the next-generation liquefied natural gas (LNG) carrier currently under construction for Mitsui. 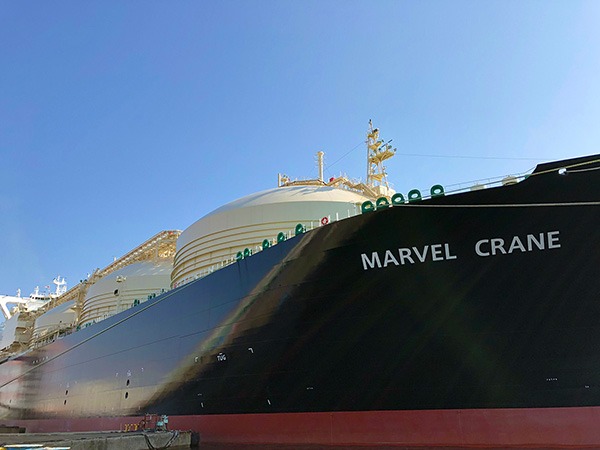 Image: MARVEL CRANE is the first of two LNG carriers with the same design being constructed for Mitsui. Photo courtesy of Mitsubishi Heavy Industries, Ltd.

Mitsubishi Shipbuilding said that the new advanced LNG carrier is designed to significantly improve both LNG carrying capacity and fuel performance due to the inclusion of more efficient hull structure and hybrid propulsion system.

Mitsubishi Heavy Industries Marine Structure, a MHI Group Company based in Nagasaki has managed the construction of the vessel, launched on 3 August 2018 and is expected to be completed by March 2019.

The christening ceremony is held at the Koyagi Plant of MHI’s Nagasaki Shipyard & Machinery Works and was attended by many people involved with the project including Mitsui Counselor Hiroyuki Kato, who has announced the name of the ship at the ceremony.

Once completed, Mitsui is planning to put the new LNG carrier into service at the Cameron LNG Project in the US to transport LNG for the project.  Sempra Energy indirectly holds a stake of 50.2% in the Cameron LNG project and is partnered by Total, Mitsui and Japan LNG Investment.

Mitsubishi Shipbuilding has received order for building the new vessel from MI LNG Company, a joint venture for the design and sale of LNG carriers established by MHI and Imabari Shipbuilding.

Furthermore, the vessel is equipped with a modified version of the highly reliable Moss spherical tank, an apple-shaped tank with a protruding upper half. The tank design expands the ship’s LNG carrying capacity without increasing its width and allows the ship to pass through the new Panama Canal.

The ship is equipped with MHI’s high-efficiency reheat marine steam turbine engine, or MHI Ultra Steam Turbine Plant (UST).  UST is a dual-fuel engine power generator, which is capable of burning both natural gas and diesel.