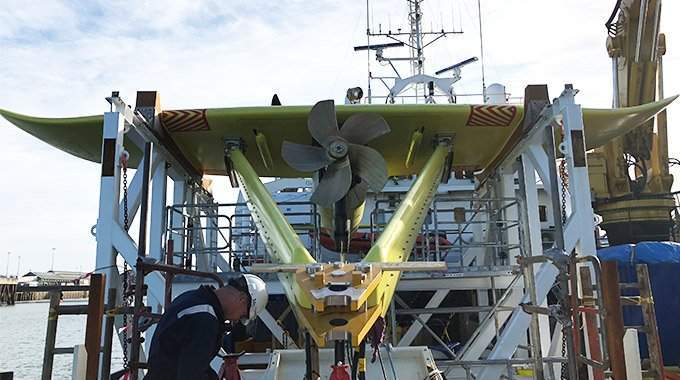 “We are entering a new era of renewable energy generation and Minesto is at the forefront”, said Minesto’s CEO Dr Martin Edlund. “The achievements in Wales over the last few months makes us confident that our unique technology can operate in low-flow tidal streams and ocean currents, offering predictability and reliability to the energy mix.”

The first utility-scale system of Minesto’s patented and awarded Deep Green technology is commissioned at the Holyhead Deep site off the coast of North Wales. Minesto has entered the second commissioning phase and has achieved initial electricity generation from the kite.

“This is the first step towards full power production. Our focus now is on enhancements of the power production capacity as we progress with our Holyhead Deep tidal site and other establishments”, said Martin Edlund.

Commenting on the offshore activities in Wales, Minesto’s COO David Collier said: “At this stage it’s all about demonstrating that the technology works as planned. What’s most pleasing with the commissioning of this first device at a larger scale is that we have shown that we have safe and efficient procedures for handling the system and that it performs as it was designed to do.”

Operating Minesto’s marine energy converter is very similar to flying a stunt kite in the air. By “flying” the subsea kite faster than the actual tidal flow, the Deep Green technology enhances the energy conversion compared to other tidal technologies. This makes it a commercial proposition applicable in vast areas around the world where no other known or verified technologies can operate cost effectively.