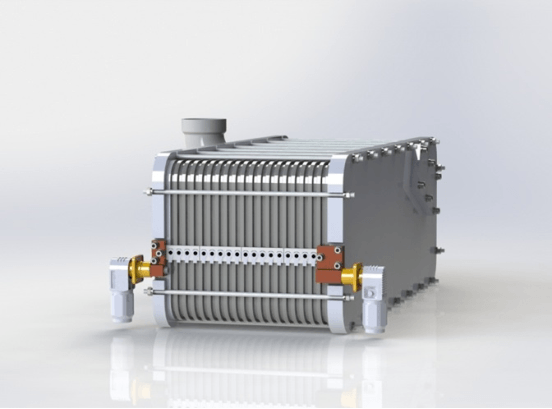 The fuel regeneration process requires application of an electric current across the opposing electrodes of each regeneration cell. Particles of zinc are “grown” on the cathode and oxygen is evolved on the anode. The zinc particles are periodically washed off the cathode using the same electrolyte in which they were produced and then stored in the fuel tank. The oxygen is then released into the atmosphere. A flexible number of regeneration cells are arranged in series electrically to increase the capacity of the complete regeneration module.

Successful operation of the regeneration module represents the culmination of development of the entire ZRS. This includes the mechanism for generating the flow of electrolyte to wash the zinc particles from the electrodes, the mechanism for collecting and transferring the particles so produced, and the control system that manages the sequencing of all regeneration functions. The control system is constructed from a custom microprocessor control board plus proprietary embedded software. All of this functionality has now been successfully integrated to enable the production of the zinc particulate fuel.

The MGXR ESS is a modular Energy Storage System designed to deliver power in the range 20 kW – 50MW and storage in the range of 120Kwh – 1GWh over extended periods of time. With the advantage of rechargeable zinc-air fuel cell technology, the system can be configured to support a wide range of discharge power, recharge power and duty cycle requirements. Since the energy storage capacity of the system is determined only by the size of the fuel tank, a very cost-effective scalable solution now exists as an alternative to the linear power storage ratio available in a lithium-ion battery.

The fundamental limitation of Li-ion is a linear power to storage ratio severely limiting flexibility and vastly increasing cost of storage even when limited output wattage is required. This gives an overwhelming advantage to MGXR’s zinc-air fuel cell technology in high capacity, long duration commercial and industrial as well as grid scale applications. In addition to containing no expensive commodities such as lithium or cobalt, the zinc air fuel cell battery has a much lower cost of storage reflecting a paradigm shift essentially eliminating the traditional linear fixed power / storage ratio and allowing for scalable power with highly flexible storage capacity at essentially any ratio, limited only by the physical parameters of the fluidized zinc storage tank(s).

The zinc-air fuel cell battery has completely decoupled power and storage subsystems with ratios of 1:5 up to 1:20 and conceptually 1:100, giving significant advantage in any scenario requiring more than a few hours of storage. This fills the need in both renewables storage as well as industry and grid scale opportunities in power acquisition and distribution along with the inherent benefits of clean steady power; with the potential to acquire power not just overnight and discharge on demand during the day but to take advantage of much larger swings in power demand and supply such as weekly, monthly, and potentially seasonal fluctuation.

Charging is also flexible and is scaled to match discharge but is a separate subsystem that can be scaled to match supply markets and timeframe of power availability whether long or short windows for power acquisition. This creates large scale arbitrage and cost savings opportunities as well as a policy level opportunity to enhance localized power infrastructure without the need to build new power plants or transmission lines.

The flexibility of the MGXR ESS enables it to service a wide range of applications. Typical examples include:

Industrial scale on demand power for peak shaving or standby

The MGXR ESS is designed according to a modular architecture that enables a wide variety of system configurations to be created from a small number of common subsystems. Each subsystem implements a single element of the technology: