MGX Minerals has announced that drilling has started at the Kibby Basin, Nevada lithium brine property located in the western portion of the Great Basin in Nevada. 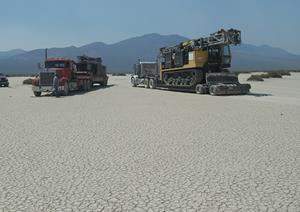 he drill program is being conducted by Harris Exploration Drilling & Associates Inc. (“Harris”). Harris has extensive experience drilling Clayton Valley lithium brines.  Clayton Valley is the home of Abermarle’s Silver Peak Mine, the only US lithium producer and is located 50km to the South of the Kibby Basin. Eight drill targets were generated based on results from a Quantec MT geophysical survey completed in January. The proposed drill holes are designed to test a large MT conductor which may represent aquifers containing lithium brines. The drill holes have been designed to intercept the MT anomaly starting at depths of 325 m (1065 ft.) and continue to as deep as 760 m (2500 ft.). The objective is to determine the nature of the conductor, collect sediment samples for lithium analyses, identify aquifers and sample water and any brines encountered.

About the Kibby Basin Lithium Brine Partnership
MGX is partnered with Belmont Resources (TSX-V: BEA) on the Property and currently earning a 50% interest with the goal of forming a 50/50 Joint Venture (the “Joint Venture”) to utilize MGX’s rapid lithium extraction technology. Kibby Basin is located in the western portion of the Great Basin in Nevada. The property covers 2,560 acres located in Esmeralda County, Nevada. Kibby Flat is a dry playa and no springs or water sources occur on the Property. Geothermal research by the Nevada Bureau of Mines and Geology (“NvBMG”) identified three wells and springs in the region. All three sources indicated near-surface water. Nevada has abundant geothermal resources and NvBMG compilation has outlined areas with potential heat flow, based on surface temperatures of springs, drill hole-water temperatures, geothermal-related geochemical signatures, and associated geologic settings. These areas suggest zones of potential elevated heat flow.

Geologic research of the Kibby Basin has indicated that proximal rhyolitic flows and tuffs surrounding the basin could be a potential source of Li brine in the Kibby Basis Playa. In addition, the Kibby Basin is located within a geothermal cluster at a basin low setting. Regional geophysical signatures in the area reflect similar anomalies comparative to that of Clayton Valley, approximately 50km to the South, location of Abermarle’s Silver Peak Mine, the only North American lithium producer.