Masdar (Abu Dhabi Future Energy) and environmental management company Bee’ah have completed the financing of a $220m waste-to-energy (WTE) plant in Sharjah, the first such plant in the UAE. 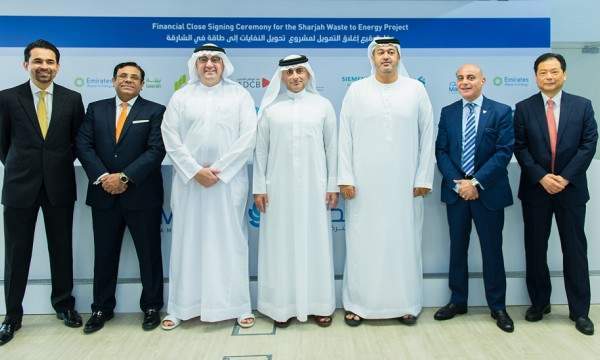 Managed by Emirates Waste to Energy Company, a joint venture formed by Masdar and Bee’ah in 2017, the Sharjah WTE facility is expected to go on stream by 2020.

The new plant will be established at Bee’ah’s Waste Management Center in Sharjah. It will process more than 37.5 tons of municipal solid waste (MSW) per hour to ensure sustainable generation of electricity.

The Sharjah WTE plant is expected to contribute to reaching the UAE’s target of diverting 75% of its solid waste from landfills by 2021, as well as Sharjah’s zero-waste-to-landfill goal.

The new plant will have a capacity of around 30MW, enough power to supply around 28,000 UAE homes.

An electricity turbine connected to the grid will be powered by heat from the processing of waste, and flue gases will be released into the atmosphere after being treated.

The plant has been designed to meet stringent environmental standards, including the European Union’s Best Available Techniques.

In May, French engineering company Constructions Industrielles de la Méditerranée (CNIM) has been appointed to design and build the facility, and operate it after completion.

Masdar has its renewable energy projects in the UAE, Jordan, Mauritania, Egypt, Morocco, the UK, Montenegro, Serbia and Spain.

The Sharjah WTE facility is one of several renewable energy projects that Masdar has showcased during the Water, Energy, Technology and Environment Exhibition (WETEX), organized by Dubai Electricity and Water Authority (DEWA) in Dubai from October 23-25, 2018.