Lundin Petroleum’s subsidiary Lundin Norway has agreed to acquire the entire acreage position of Lime Petroleum in Utsira High offshore Norway to increase its stakes in the Rolvsnes discovery and Goddo prospect. 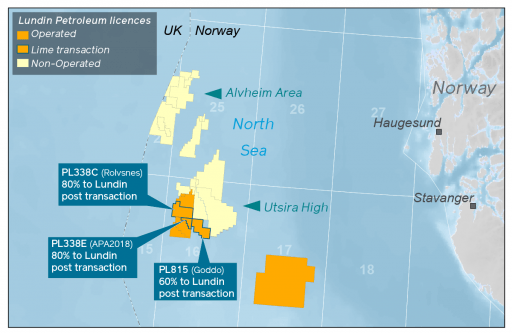 As per the terms of the transaction, Lundin Norway will pay $43m to Lime Petroleum along with a contingent payment of an additional $2m.

The acquisition increases Lundin Norway’s stake in the Rolvsnes oil discovery in the PL338C license and in the recently awarded, nearby license PL338E1 from 50% to 80%. In the Goddo prospect, contained in the PL815 license, the Lundin subsidiary will raise its stake from 40% to 60%.

Lundin said that the acquisition will strengthen its position in the proven weathered and fractured basement play on the Utsira High, located near the Edvard Grieg facilities.

The closing of the deal will be subject to receipt of customary government approvals.

The Rolvsnes oil discovery is located 3km south of the company’s operated Edvard Grieg platform on the Utsira High. It has a gross estimated resource of 14-78 million barrels of oil equivalent (MMboe).

Lundin expects to undertake an extended well test at the discovery in 2021 for better understanding of the long-term reservoir behavior. The company said that a production test taken up last year de-risked the on trend Goddo basement prospect in adjacent PL815 further.

An exploration well is scheduled to be drilled at the Goddo this year.

The Rolvsnes and Goddo assets have a combined gross resource potential of over 250 MMboe, said Lundin.

Lundin Petroleum CEO and president Alex Schneiter said: “I am very pleased to announce the acquisition of Lime Petroleum’s working interests in Rolvsnes and Goddo, which not only further consolidates our position in one of our core areas, but also offers the opportunity to further benefit from the significant potential in this successfully tested basement play, which is unique on the Norwegian Continental shelf.

“This acquisition also provides further commercial alignment with Edvard Grieg, as we focus on using high-margin, tie-back developments to extend plateau production through the facilities beyond the current mid-2020 guidance.”