Russian oil and gas firm Lukoil and Basra Oil have inked a new development plan of West Qurna-2 field in southern Iraq, aimed at increasing its production to 480 thousand barrels per day by 2020. 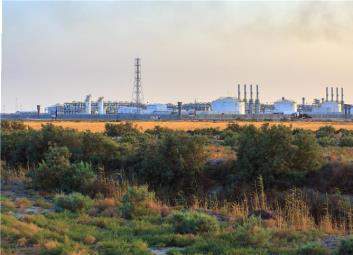 Image: Infrastructure at the West Qurna-2 field in Basra Province in Iraq. Photo: courtesy of LUKOIL.

Russian oil and gas firm Lukoil and Basra Oil have inked a new development plan of West Qurna-2 field in southern Iraq, aimed at increasing its production to 480 thousand barrels per day by 2020.

The plan also envisages the production from the onshore oil field to reach 800 thousand barrels per day in 2025.

Lukoil said that it plans to meet the production objectives by drilling and commissioning new production and injection wells among others.

The development plan also calls for construction and launching of oil treatment, storage and transportation facilities and facilities to be used for gas treatment and power generation.

Lukoil, in a statement, said: “The experience acquired by the Company in the region, the existing infrastructure and cost compensation within the project development from the current production will ensure maximum efficiency of the project implementation.”

Located 65km north-west of Basra, the West Qurna-2 field is considered to be one of the largest oil fields in the world with recoverable reserves of about 14 billion barrels.

According to Lukoil, over 90% of the reserves in the onshore Iraqi oil field are concentrated in Mishrif and Yamama accumulations.

First oil from the West Qurna-2 field was drawn in March 2014, and the largest production increment in Iraq has been reached there by now at 400,000 barrels per day, said Lukoil.

Discovered in 1973, the West Qurna-2 field spans an area of 340km2 and it currently makes up about 9% of the total oil produced in Iraq.

In another part of the world, Lukoil advanced the Yury Korchagin field Phase 2 development in the Russian part of the Caspian Sea by completing installation of the topside of the wellhead platform in late April.