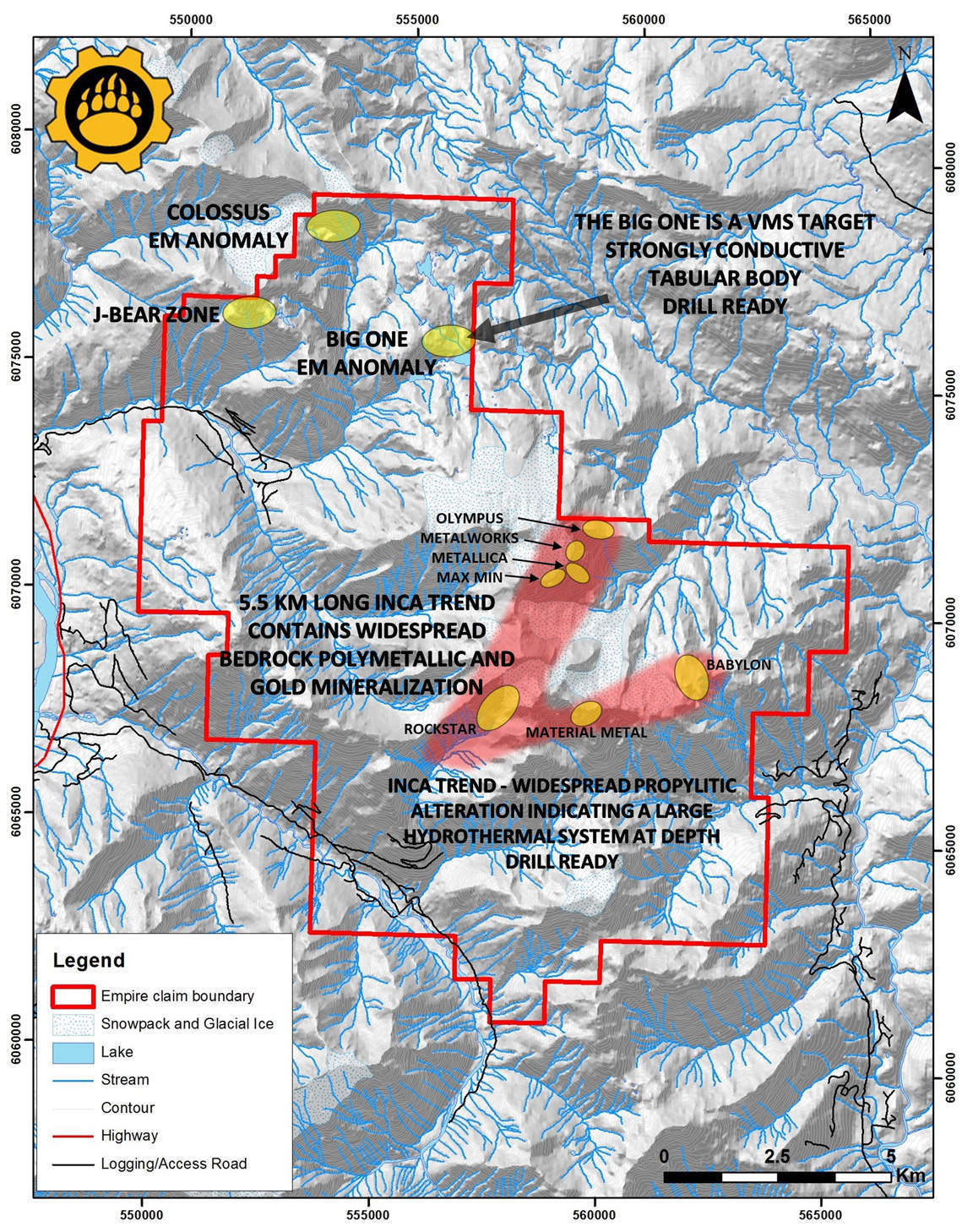 The Empire inaugural drill program will focus on targeting the widespread gold and polymetallic mineralized zones along the 5.5 km Inca Trend. The mineralization and alteration at Max Min and Metalworks at the northern end of the Inca Trend, strongly indicates the presence of a polymetallic feeder system at depth. Towards the southern end on the Inca Trend, at Rockstar, the mineralization and alteration are more typical of a volcanic massive sulphide mineralizing system; the same can also be said for the Big One zone to the north.

The Big One target is a strongly conductive, subsurface tabular body consistent with a VMS target.  The 2018 ground IP program just completed on the Big One target also identified a significant chargeability anomaly in the subsurface that is coincident with the 2017 SkyTem survey EM anomaly. Drill collars and pads are being sited and built in preparation for drilling this VMS target in the immediate future.

Mapping, prospecting, IP, and channel sampling remains ongoing over an area of 1.5 km by 550 metres, and many new areas containing mineralization have been found in 2018. Drill collars and pads are being sited and built in preparation for testing the mineralization to depth and along strike.

Initial prospecting on Empire has already resulted in the discovery of the new J-Bear Zone in an area of receding snowpack and ice. The J-Bear Zone was discovered along a regional northwest trending magnetic high. Grab and channel samples from this zone contained massive chalcopyrite and bornite and were collected over an area of approximately 150 metres by 20 metres. The J-Bear Zone remains open and the area will be mapped and prospected as the snow and ice continue to recede. Assays results are pending.

The Midas property is located in a world class geologic setting and contains the King Solomon zone, a 2.1 by 1.6 km region that is defined by widespread bedrock-hosted, polymetallic and gold mineralized channel, chip and grab samples. The widespread gold and polymetallic mineralized showings, anomalous soil geochemistry and extensive alteration suggest the King Solomon Zone may be the surface expression of a significant hydrothermal system.

Juggernaut plans to begin its inaugural drill program on Midas with a second drill rig set to start within a week. Drilling will target several zones of bedrock polymetallic and gold mineralization on the King Solomon Zone that contains channel cuts of up to 4.43 meters of 10.28 grams per tonne gold.

“We look forward to reporting drill results from these exciting new discoveries from both the Empire and Midas properties with much anticipation.”