Russia and Saudi Arabia want to extend existing cuts for another month, but tensions over compliance have surfaced ahead of the next Opec+ meeting 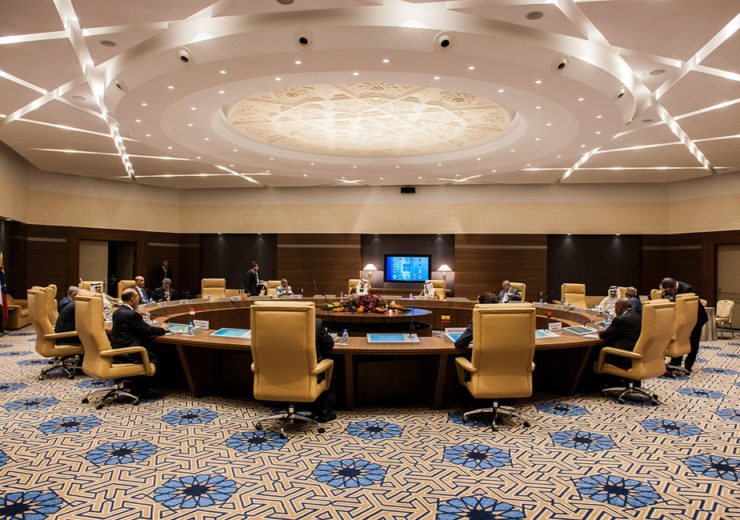 Compliance issues threaten to derail the next meeting of the oil-producer alliance (Credit: Opec)

Details are starting to emerge ahead of an Opec+ meeting that will have big ramifications for a fragile oil market – although much remains unclear, including when the summit will take place.

Following April’s agreement to collectively curb output by a record 9.7 million barrels per day (bpd) during May and June, members of the oil-producer alliance will reconvene to discuss whether to extend the cuts or ease them.

According to insider sources cited by Reuters and Bloomberg, Saudi Arabia and Russia – the two de facto leaders of the Opec+ group – have already reached a preliminary agreement to extend the current arrangement by an extra month through to the end of July.

Issues over compliance threaten to derail a new agreement

But tensions over compliance have arisen, with both Riyadh and Moscow saying their participation will be contingent on those member countries which have not adhered to the pact so far – including Iraq and Nigeria – committing to meet their quotas.

“Any agreement on extending the cuts is conditional on countries who have not fully complied in May deepening their cuts in upcoming months to offset their overproduction,” one source told Reuters.

Officials from both Iraq and Nigeria have taken to social media in recent days to say their countries are making efforts to fulfil their respective commitments to the deal.

Despite Iraq’s severe financial constraints, we’re addressing technical issues that will allow us to further reduce oil output. We remain committed to the OPEC+ deal, and to doing our part towards ensuring a stable and secure global energy market. pic.twitter.com/bBE2pa7gSy

Iraq’s finance minister and acting oil minister, Ali Allawi, said on Twitter the country is “addressing technical issues” that will enable it to reduce production.

Nigeria’s minister of state for petroleum resources, Timipre Sylva, wrote on Instagram that his country has made “concerted efforts to adhere to this commitment and will continue to do so unequivocally”.

“Nigeria will continue to fully comply with the agreement and look forward to improving on its compliance levels for the lifespan of this historic intervention by Opec+,” he added.

The next Opec+ meeting had been scheduled for next week, although at the request of Algeria it was provisionally moved forward to tomorrow (4 June).

However, with disagreements between member countries over compliance, and the ultimatum now issued by Saudi Arabia and Russia, this timetable has been cast into doubt.

If no new agreement were to be found this month, the existing Opec+ framework would see collective cutbacks reduce from 9.7 million bpd to 7.7 million bpd effective of 1 July, with this level due to last until the end of the year.

Oil prices have been bouncing back from historic lows in recent weeks, as the Opec+ curtailments, market-led production declines particularly in the US and Canada, and a demand resurgence delivered by lockdown easing have all combined to restore some balance to a market that was upended during the first quarter by the impact of coronavirus.

Brent crude rose above $40 per barrel for the first time in months earlier today (3 June), although suggestions that the next Opec+ could be in doubt have served to reverse the gains, with the benchmark now back down to $39 per barrel.

Last month, Saudi Arabia revealed it would make a voluntary addition to its share of the cutbacks, pledging to reduce output throughout June by an additional one million bpd to 7.5 million bpd.

According to Reuters, Saudi Arabia – along with Kuwait and the United Arab Emirates, which both joined it in making additional voluntary curtailments – have no plans to extend this effort beyond June.

The production cuts put in place by Opec+ to address the huge oversupply of oil cascading through global markets at a time of record low demand has been largely effective in stabilising the volatility that more than halved the price of oil in a matter of weeks earlier this year, as the coronavirus pandemic intensified around the world.

However, the situation remains precarious, with global demand growth still in its infancy and the potential for a resurgence of Covid-19 a big asterisk next to any prediction of future trends.

Last month, the International Energy Agency upgraded its oil demand forecast for the year, buoyed by faster-than-expected easing of lockdowns, although executive director Dr Fatih Birol warned that “it’s far too early to say that we are soon going to reach rebalancing of the markets”, adding the recovery process is “just beginning”.

With this in mind, oil producers will be reluctant to start pumping large volumes back into a marketplace that is only just beginning to find its feet again.