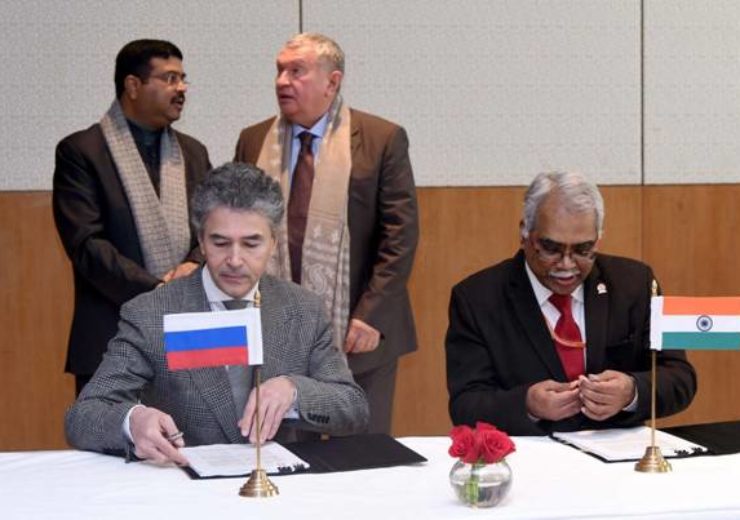 Signing of the contract between Rosneft and IndianOil. (Credit: Press Information Bureau)

The volume of oil under the contract will be supplied to India by the end of 2020 through the port of Novorossiysk. It will be loaded in Suezmax vessels at the Russian port will reach India, bypassing Straits of Hormuz.

The Indian Ministry of Petroleum and Natural Gas said that procuring the Russian crude oil via long term contracts is a part of the country’s strategy for diversifying its crude oil supplies from non-OPEC nations.

Signing of the contract was done during Rosneft CEO Igor Sechin’s visit to New Delhi where he had a meeting with Dharmendra Pradhan.

Rosneft, in a statement, said: “An important subject of talks between Sechin and Pradhan was the issue of providing Indian consumers with quality crude and petroleum-based products, including increasing in Russian oil supplies to India.

Rosneft said that India has agreed to take part in the proposed Vostok Oil project to be developed in the Krasnoyarsk Krai region in Russia.

The Russian state-owned oil company said that in order to negotiate the terms of the participation of the Indian firms in the Vostok Oil project in the shortest time possible, a regular working group will be created. The group will have representatives of Russian and Indian firms.

According to the Russian energy company, Vostok Oil has an advantage of being in proximity to the Northern Sea Route, which gives scope to supply crude oil from the project’s fields in two directions simultaneously, to European and Asian markets.

The company said that the execution of the Vostok Oil project ensures that the task to grow the cargo traffic on the Northern Sea Route up to 80 million tonnes by 2024 set by the Russian President Vladimir Putin will be achieved.