To be located near Kathmandu, the hydropower plant could generate 1,200GWh of clean energy annually, generating power for 9 million Nepal residents 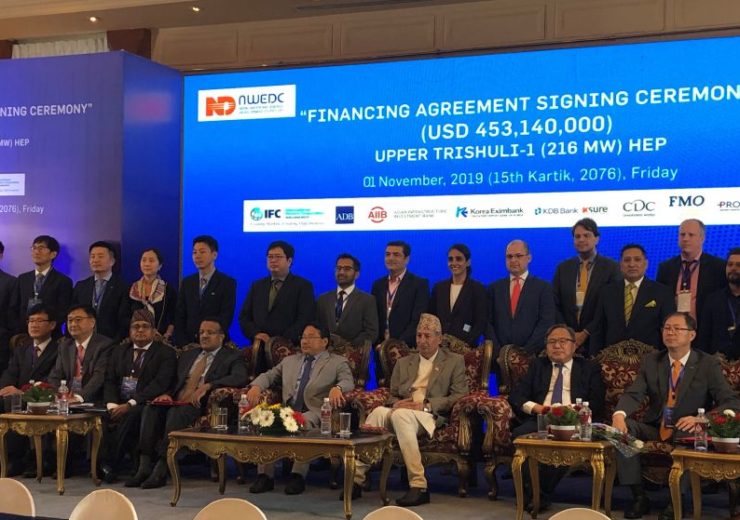 Image: Representatives of development finance institutions, the project sponsor and government officials after the signing of loans for the Upper Trishuli-1 Hydropower Project. Photo: Courtesy of the Asian Development Bank.

The International Finance Corporation (IFC), the Asian Development Bank (ADB) and other partners have both agreed to provide loans totaling $450m to Nepal Water and Energy Development Company (NWEDC) to build and operate a 216MW hydropower plant on Trishuli River.

To be located 70km from Nepal’ capital city Kathmandu, the hydropower plant is expected to enhance the country’s energy security and strengthening its renewable resources.

IFC and a consortium of lenders have agreed to provide $453m in debt financing package for Upper Trishuli-1 hydropower plant project.

NWEDC’s owners include Korea South-East Power, Daelim Industrial, Kyeryong Construction Industrial, and IFC. IFC is offering $190m in financing, which includes $95m in equity and loans from its own account and $95m as the implementing entity for other funding sources.

The Multilateral Investment Guarantee Agency, another member of the World Bank Group, will provide $135m in guarantees to cover political risk for the sponsors.

IFC South Asia director Mengistu Alemayehu said: “This project represents a significant milestone in the development of Nepal’s hydropower potential as it has been able to attract meaningful private sector participation, particularly from international investors.

“It also shows the unprecedented resilience and commitment by the government, the sponsors, and other stakeholders against all odds over the years, including a major earthquake. We expect this project to become a model for expanded investments in developing Nepal’s hydropower to meet the growing domestic demand and export to the neighboring countries.”

Once operational in 2024, the plant could generate more than 1,200GWh of clean electricity to Nepal’s national grid annually and it could increase the country’s electricity supply by one-third from the current levels, while supplying clean, reliable power to nearly 9 million people.

Nepal Water and Energy Development Company CEO Bo-Seuk Yi said: “There is no question that Nepal has the potential to be an energy powerhouse. To realize that promise, Nepal can enlist the help of private companies, which have the capital and expertise to make major projects a reality.”