The project's founding consortium of investors, promoted by the Basque Government, includes Iberdrola, CIE Automotive, Enagás, EIT InnoEnergy and CIC energiGUNE, whose research work has facilitated the development of the initiative 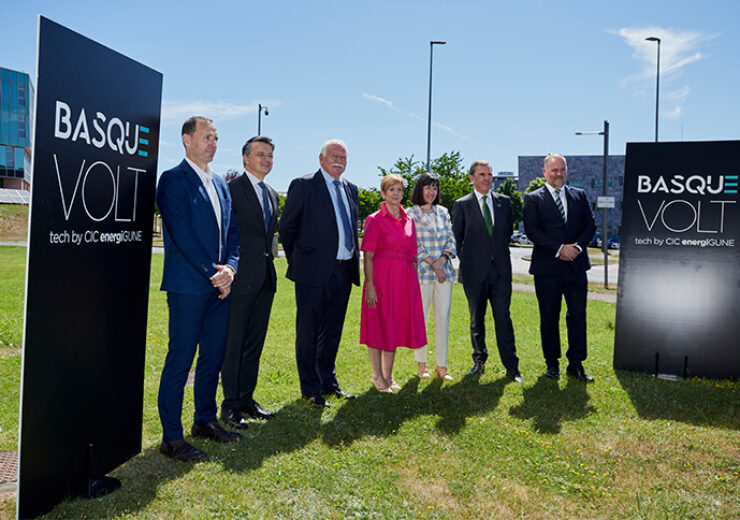 The partners of the Basque company Basquevolt. (Credit: Iberdrola, S.A.)

Basquevolt, the Basque solid-state battery initiative, will begin production of battery cells in 2027 with the aim of reaching 10GWh capacity, after its creation was signed today. This is one of the main objectives set out in Basquevolt’s articles of association, which include as founding shareholders the Basque Government, through the venture capital fund Ezten, Iberdrola, CIE Automotive, Enagás, EIT InnoEnergy and CIC energiGUNE.

After two years of intense work and maximum discretion, Basquevolt is now a reality that will make the Basque Country a European benchmark in the development of solid-state batteries.

The experience of the companies that make up the initial group of investors ensures that Basquevolt is in a very important competitive position both in the battery race, where there are also important opportunities for collaboration, and in the storage industry, which is key to making progress in the energy transition.

Basquevolt begins its journey of starting up the first production line within 4 years, supported by an investment of more than 700 million euros, and which will be able to generate more than 800 direct jobs.

The first phase of Basquevolt will be based at the Alava Technology Park, in the Marie Curie Building (Albert Einstein, 35), located just a few metres from CIC energiGUNE. The centre, which will offer Basquevolt its technological support, based on more than 10 years of research work in the field of solid-state batteries, has a team of researchers led by Michel Armand – “father” of the polymeric solid electrolyte-. In this sense, Basquevolt’s technology is based on the use of a composite electrolyte patented by the Basque centre.

The promoters of Basquevolt are aware that liquid electrolyte lithium batteries are reaching maturity and that the next technological breakthrough to truly unlock the true potential of energy storage must come from the solid state. The company’s initial targets are the development of prototype cells and a pilot production line in 2025, with the ambition to start production in 2027.

Specifically, Basquevolt aims to develop – in a sustainable way – the best materials and battery cells to enable the mass deployment of electric transport, stationary energy storage – including hybridisation with hydrogen-gas systems – and advanced portable devices.

Iberdrola is making this investment through its international start-up programme PERSEO. Since its creation in 2008, PERSEO has invested more than 100 million euros in start-ups that develop innovative technologies and business models, focusing on those that improve the sustainability of the energy sector through greater electrification and decarbonisation of the economy.

The programme has focused its activities on analysing business opportunities and technological collaboration with start-ups and emerging companies around the world, analysing 300 companies each year and creating an ecosystem of almost 7,000 entrepreneurial companies. This investment instrument currently holds a portfolio of eight companies.

Through PERSEO, Iberdrola carries out more than 25 real tests of technologies per year, which serve as a first step towards establishing a commercial relationship or partnership with start-ups. In addition, in the last two years the group has launched a total of fourteen challenges in which 700 start-ups have participated.

Beyond the financial contribution, PERSEO’s support to these companies has been key in defining their product and business, offering them its knowledge and access to Iberdrola’s market. On the other hand, the work carried out with the start-ups has served our company as a technological antenna to find out where our sector is heading.