PowerCell's joint venture Hyon has secured an approval from DNV GL for a fuel cell-based power generating unit for vessels. 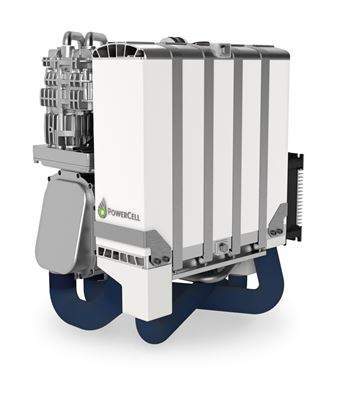 The unit is built on the PowerCell MS-100 fuel cell system, paving the way for a wide use of fuel cells in ships.

PowerCell CEO Per Wassén said: “The approval is a milestone that not only shows that our fuel cells are able to meet the tough demands in maritime applications, but also opens up new markets for us.”

The English version is an in house-translation. In case of any discrepancy, the Swedish text will prevail.

Hyon is a joint venture owned by PowerCell and the two Norwegian companies Nel and Hexagon Composites, which manufactures, among other things, electrolysers and hydrogen gas tanks. Based on the three companies’ products and know-how, Hyon has developed a complete and module-based power generation solution for ships that now has received an approval-in-principle from the certification company DNV GL. DNV GL is a world-leading certification company and one of the world’s largest classification societies for ships and offshore. This is the first time that a power generating unit based on hydrogen and fuel cells receives an approval for use in ships from DNV GL.

Commercial shipping affects the environment, through emissions of both carbon dioxide and particles, and the International Maritime Organization, IMO, has set the goal of halving emissions from shipping by 2050. In order to achieve that goal, increased use of non-fossil and renewable fuels will be required for both propulsion and power generation.

Hyon AS maritime technical manager Arild Eiken said: “A power generating unit based on fuel cells is significantly smaller than one based on diesel or gas with equal power and does not emits greenhouse gases, particles, sulphur or nitrogen oxides.”

Arild Eiken said: “As the shipping industry is changing, hydrogen fuel cells will become a very attractive alternative. Already, confirmed field tests that utilise fuel cells and combinations of fuel cells are already under way for different types of vessels.”

The now approved fuel cell solution can be installed above or below the main deck and encompasses cabinets from 100kW up to containers of megawatt power.