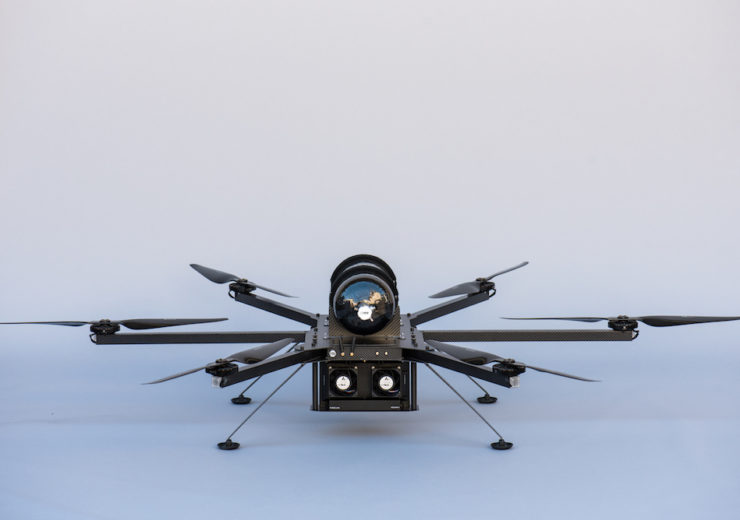 Hycopter is a hydrogen-powered multirotor drone, capable of up to 3.5 hours of flight time (Image courtesy of HES Energy Systems)

Dam and hydropower inspections could be made easier with the development of the Hycopter drone.

The Hycopter is a hydrogen-electric, multi-rotor industrial drone capable of several hours of continuous flight time (up to 3.5 hours) using a hybrid fuel cell/battery, where hydrogen is the main energy source.

As hydrogen is very lightweight, the drone is able to fly for longer durations than battery drones, which can only fly 20 to 30 minutes at a time. This changes the opportunity for aerial inspections over large areas or on big infrastructure sites such as hydropower dams.

The drone is powered by a 1500W specially-designed fuel-cell called Aerostak, coupled to ultralight carbon fibre hydrogen storage cylinders. This same power system has been awarded the Efficient Solution Label by the Solar Impulse Foundation – a prestigious designation assigned to solutions that manage to be eco-friendly, sustainable and economical.

Images collected by the Hycopter can be uploaded to its cloud platform called H3 Zoom, where a proprietary machine-learning algorithm will turn raw data into inspection reports. The system first recognises the materials in the image, then locates anomalies and defects, and finally flags them out on a 2D/3D model of the structure inspected, classifying them by severity level.

A special portal allows engineering experts to comment on the findings, which are then also applied to the final inspection report, which is now digitised.

Creating a digital history of all dams and their condition, which so far has never been done, is also part of the objective of this initiative.

Three companies are involved in the development of the drone.

H3 Zoom has meanwhile developed a visual analytics machine learning engine on the cloud, which turns raw image data to automated and interactive defect management reports. Data inputs can come from any type of camera, whether from a cellphone, drones, or even underwater vehicles.

EPH Engineering is a Brazilian firm highly experienced in the design, management, and consultancy of engineering projects in the field of hydroelectric power generation. It has developed several activities such as design, project management, dam break studies, inspection, emergency action plan and interface with clients, builders, and suppliers of equipment.

It has so far participated in the development of 65 basic projects, 35 executive projects, three owner’s engineering, 14 due diligence, and 11 dam safety plans.

Currently, dams are monitored through instrumentation equipment and visual inspections. Since many of these structures are very tall and/or very extensive, visual inspections are usually done by car and foot from the dam crest.

Until then, a single way to cover 100% of the visually inspected dam areas was through climbing, but it is not a common practice for routine inspections.

In recent years drones have started to be used to make this process easier, but battery drones don’t fly for very long so it requires many flights to inspect large structures. In view of accelerating the whole process, a new type of long endurance drone associated to a faster data processing system using AI begins to solve the problem in a more holistic way.

Similarly, in the case of dam rupture, drones can be used as support tools as part of each dam’s emergency action plan.

The Hycopter drone was successfully tested at a Copel hydropower dam site in Brazil during August 2019. The first flights were performed over the Vossoroca Dam which is part of the Chaminé hydropower complex, in order to collect an important set of images.

These images were gathered by a special flight path automation software developed by H3 Zoom to create a 3D model of the dam and calculate the best flight trajectory for consistent image collections.

Regular inspections have been mandatory in Brazil since the 2010 National Plan for the Safety of Dams was established by federal law. The Hycopter will make it possible to comply with the regulations and set up inspections on a regular basis.