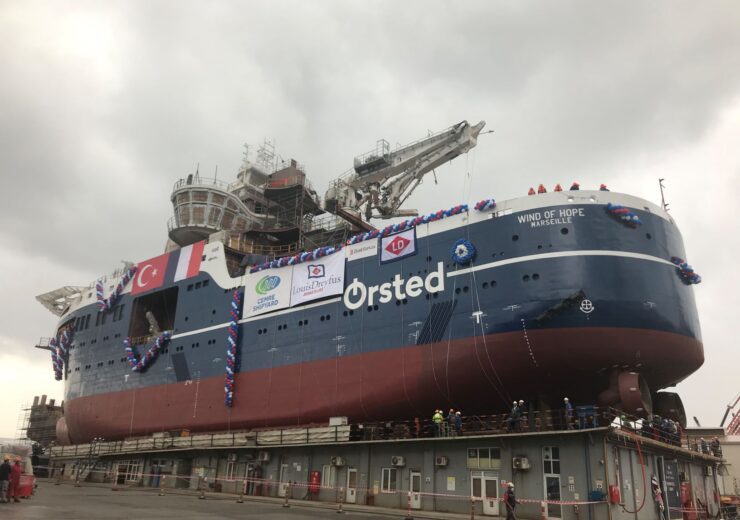 Danish wind energy leader Ørsted is set to welcome the latest edition to their burgeoning fleet of pioneering vessels as their new service operations vessel (SOV) was launched this week.

The Wind of Hope is a state-of-the-art ship which is being built at Cemre Shipyard in Turkey for vessel owners, Louis Dreyfus Armateurs (LDA).

After the SOV launching ceremony that took place on September 21st, the Wind of Hope is expected to arrive at Ørsted’s east coast operations and maintenance facility at the UK port of Grimsby next year.

The vessel will be operated out of Hornsea Two offshore wind farm, accommodating up to 64 technicians who will service and maintain the wind turbines and an additional vessel crew.

Morten Holm, Head of Operations for Hornsea Two at Ørsted, said: “We’re extremely pleased to be able to reach this exciting milestone for the wind farm. Technicians will spend two weeks at a time onboard this vessel as they live, eat and sleep onboard whilst working offshore. The Wind of Hope has been designed with comfort and practicality in mind and we look forward to welcoming her to her new home in Grimsby.”

Totalling a length of 84m, the SOV is two metres larger than the new Hornsea Two blades which have been manufactured locally at Siemens Gamesa’s blade factory in Hull.

Kamil Beffa, Deputy CEO of Louis Dreyfus Armateurs, added: “We are delighted to reach a turning point in the construction of this second SOV dedicated to Ørsted’s Hornsea Two windfarm. It means a lot to our marine industrial solutions strategy as a partner of the Danish wind energy leader. It is also an exciting commitment in favor of clean and renewable energy and our continued focus on safety and environmental footprint with innovative ship designs.”

Working as an accommodation base, the Wind of Hope has been fitted with a number of modifications intended to ensure that shift patterns offshore are as comfortable as possible for the crew.

A motion compensated gangway allows technicians to walk to work from the ship directly onto the transition piece of the turbine they are required to access, whilst the onboard helideck enables efficient crew and cargo transfers to take place.