The San Martin Project is located about 30 kilometres northwest of Tarapoto, in the Cordillera Ayu Mayo 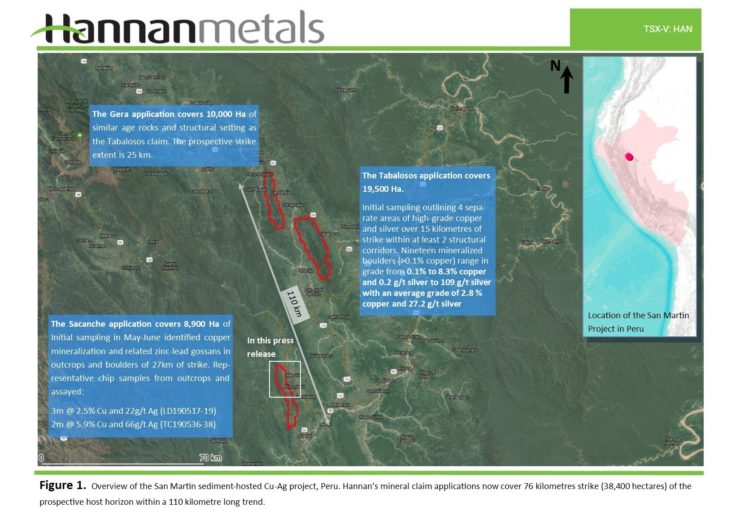 Hannan Metals Limited (“Hannan” or the “Company”) (TSXV: HAN) (OTCPK: HANNF) announces it has received notice from the Geological, Mining and Metallurgical Institute of Peru (“Ingemmet”) that the first mining concession at the San Martin Copper-Silver Project in Peru has been granted.

Michael Hudson, Hannan’s CEO, states, “The sediment-hosted copper-silver San Martin project presents a new basin-scale copper-silver district in Peru. Granting of the first mining concession is a key advancement and provides secure tenure which will allow for more advanced social and work programs to be executed, including drill permitting.  We look forward to further developing trusted relationships with local communities during our upcoming exploration programs over this large project.  The next technical steps include further geological and prospecting with an aim to achieving drill permitting in early 2020.”

The San Martin Project is located about 30 kilometres northwest of Tarapoto, in the Cordillera Ayu Mayo.  Hannan’s mineral concession applications cover 76 kilometres of combined strike of a prospective sedimentary host horizon within a 110 kilometre long basin (Figure 1).  Project access is excellent via a proximal paved highway, while the altitude varies between 800 metres to 1,600 metres in a region of high rainfall and predominantly forest cover.  To date the company has submitted 50 mineral concession applications for a total of 38,600 hectares in three different project areas named Tabalosos, Gera and Sacanche over a 76 kilometre trend.  The first granted claim, Tabalosos 1002, covers 1,000 hectares.

Hannan considers the sediment-hosted copper-silver San Martin project to be a new basin-scale copper (chalcocite) district.  Initial prospecting over the last year identified high grade mineralization in outcrop and float with associated alteration across a 100km x 50km area.  Best results from outcrop within a 20km trend include 3m @ 2.5% Cu and 22g/t Ag (LD190517-19) and 2m @ 5.9% Cu and 66g/t Ag (TC190536-38).  Similar style of outcrop/boulders have been discovered over 100km of strike with mineralization observed at multiple stratigraphic levels spatially linked to salt structures.

Since the 1970’s the area has principally been explored for petroleum, delivering large seismic datasets similar to those being used by Hannan for targeting of zinc in Ireland.  Seismically-defined basin structures and stratigraphy are now being interpreted in the context of sediment-hosted copper mineralization.

Hannan’s geological interpretation for the formation of the sediment-hosted copper and silver at San Martin is mineralization was deposited from low‐temperature oxidised saline brines formed from the several hundred metre thick Pareni Salt Formation.  The brines scavenged metals (principally copper ± silver and associated lead and zinc) from the deeper Mitu Group red beds and volcaniclastics within in a failed Traissic rift.  Circulation of saline fluids across the redox boundary was induced and focused by halokinesis (salt tectonics). Geological relationships suggest halokinesis was initiated during Jurassic rifting and was active until the early to mid-Cretaceous which coincides with the formation of an Andean foreland basin.

Under the Peruvian General Mining Law, the State retains the ownership of all mineral resources. However, the ownership of minerals is vested in the holder of a mining concession.  Mining concession rights are independent from the surface and real estate rights.  A mining concession provides the holder with exclusive right to undertake mining activities subject to additional permitting within a determined area.  All holders of a mining concession are required to move into production and comply with the applicable minimum annual production thresholds within 10 years from granting.  Other permits required to start mining activities in Peru include surface and access rights, environmental certification and permitting, construction, explosive, water resource permits and disposal of waste materials, amongst others.

Management of Hannan have significant prior experience in Peru, which is the world’s second largest copper producer. The country’s copper output is forecast to increase from 2.5 million tonnes (“Mt”) in 2018 to 3.8Mt by 2027, averaging 4.7% annual growth. Sediment-hosted deposits are the world’s second-most important source of copper accounting for approximately 20% of world production.