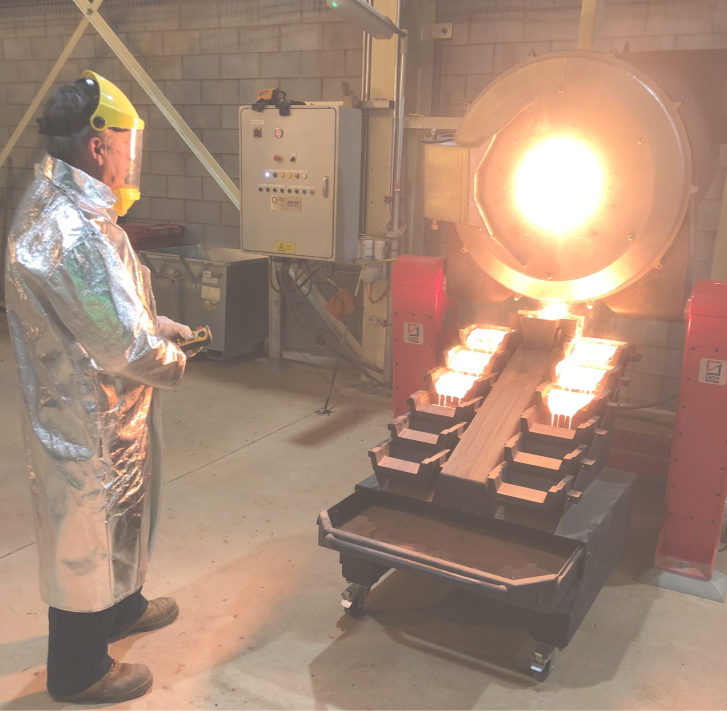 The three doŕe gold bars totalling an estimated 1139 oz were produced from the Carbon‐in‐Leach (CIL) and elution circuits.  Commissioning of the less complex gravity circuit is in progress.

Gold Fields Executive Vice President, Stuart Mathews, said:“The pouring of the first gold at a global Tier 1 gold mine like Gruyere is a significant achievement.  Gruyere is a tremendous asset based on a world‐class orebody and a forecast long mine life.  The Gruyere JV’s focus now shifts to the safe and successful ramp‐up to nameplate capacity to allow us to deliver full value to all stakeholders.  I would like to acknowledge the outstanding safety performance of the construction team which achieved 3 million construction hours without a lost time injury.”

Gold Road Managing Director and CEO, Duncan Gibbs, said: “This weekend’s gold pour is a tremendous milestone given that the Gold Road team discovered the world‐class Gruyere ore body less than six years ago.  Importantly, Gold Road joins the ranks of ASX‐listed gold producers as owner of a 50% stake in the world‐class Gruyere gold mine.  Our work is far from done – we remain committed to exploring the highly prospective Yamarna Greenstone Belt to unlock the potential through the discovery of more resource ounces for Gruyere and new discoveries that could be developed as stand‐alone gold mines.  I want to thank the entire Gold Road team and our Gruyere JV partner, Gold Fields, for the safe and successful delivery of first gold at Gruyere.”

With the delivery of first gold bars, the focus now turns to commissioning of the final components of the process plant, in  particular  the  ball  mill,  which  is  anticipated  to  be completed early in the September 2019 quarter2.  Commissioning  of  the  gravity  gold  recovery  circuit  is  in progress and follows reinstallation of pipe work required for the  safe  operation  of  the  circuit.    Gold  production  will continue  until  the  ball  mill  is  fully  operational  and  is integrated into the circuit.  During the commissioning and initial stages of ramp‐up, lower grade stockpiled ore will be processed  to  reduce  gold  losses  associated  with  lower recoveries anticipated as the plant operations are stabilised.

Commencement of the operation of the ball mill will mark the start of an anticipated ramp‐up period of six to seven months.  The Gruyere JV forecasts attaining commercial production mid‐way through the ramp‐up period.

The Gruyere JV anticipates gold production for calendar 2019 to be between 75,000 to 100,000 ounces.  The Final Forecast Capital Cost estimate remains in line with the previously announced $621 million (100% basis).

Gruyere is a global Tier 1 gold mine with a long operating life and forecast high margins.  Life‐of‐mine average annual production is forecast at approximately 300,000 ounces per annum at average All‐In Sustaining Costs over a 12‐year life of approximately $1,025 per ounce.