Falcon is a Canadian mineral exploration company focused on generating, acquiring, and exploring mineral opportunities in the Americas 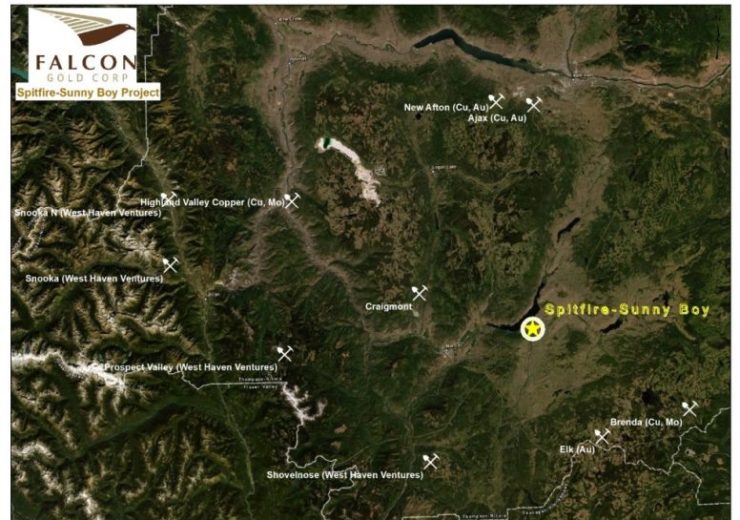 Falcon is pleased to announce the acquisition of the Spitfire and Sunny Boy claims in south central British Columbia. The claims are located approximately 16 kilometers east of Merritt and total 502 hectares. The properties are close to excellent infrastructure and access is gained via paved highway and ranch and logging roads.

The Merritt district has a lengthy history of mineral exploration and development that began in the late 1800’s with first recorded discoveries being made on the Nicola Lake Property in 1908, which location is presently covered by the north east portion of the Sunny Boy claim block. A resurgent focus in the area makes it B.C.’s newest emerging gold belt. The location map included below shows the Project in relation to mines developed in the area. The original exploration and discoveries were of gold, platinum (in tulameenite, a Pt-Cu-Fe metallic mineral) and copper. Numerous copper discoveries became major mines in the area, including Craigmont, Copper Mountain, Afton and Highland Valley.

Most of the early exploration at the Project focused on quartz veins that hosted gold, copper and silver. High grade values have been reported at 124 to 127 grams per tonne gold (Au) and 309 to 514 grams per tonne silver (Ag) in quartz vein material from underground workings by Quilchena Mining and Development Company Ltd. The narrow but high-grade veins have been trenched, pitted, blasted, and drilled but have never been commercially mined. The main showing, Master Vein, boasts high-grade gold mineralization up to 50.53 oz/t as sampled by Ken Sanders, P. Eng in 1974. To the south-west of the Sunny Boy Zone in an area referred to as the “AL” showing, soil geochemistry, geophysics (magnetometer/VLF), trenching, sampling and diamond drilling have been performed on the mineralized veins. The best drill result was 3.77 grams per tonne gold, 0.24 % copper, and 32.9 grams per tonne silver over 13.4 meters (AR #8494, AR# 15572 AR#1582, AR#18887). The Project showings have been referred to as epithermal gold occurrences by past operators.

The Project is located in the Quesnellia terrane which is characterized by submarine volcanic and volcaniclastic rocks of the Nicola group to the south and the Takla group in the north. Two major north trending structures define three structure subdivisions: the Central and Eastern belts are separated by the Summers Creek Fault, and the Central and Western belts are separated by the Allison Fault system. Locally, dacite and rhyolite flows, welded tuff and breccia and intercalated intermediate to felsic heterolithic volcaniclastic rocks are interpreted as representative of centres of felsic volcanism. The gold mineralization and geological setting of the Project bears similarities to the Prospect Valley and Shovelnose epithermal gold projects currently being explored by Westhaven Ventures Inc.

Falcon’s 2019 due-diligence work confirmed the presence of gold mineralization along the Master Vein over a 300-meter strike length with samples ranging from 0.33 to 2.74 oz/t Au. Recent data compilation of historic exploration work suggest that the best exploration targets on the property are high-grade gold vein deposits along flexures in structure in the northeastern portion of the project. The company is planning tightly spaced soil sampling, EM and IP geophysics, and structural mapping as the best approach for identifying new mineralized structures for both gold and base metals occurrences.

To earn 100 percent interest, Falcon has agreed to issue 2.5 Million common shares and 2.5 Million warrants at a conversion price of 10 cents with a 2 year term and will make a one time cash payment of $ 25,000 to the vendor on the 6 month anniversary. The vendor will retain a 2% net smelter royalty (NSR). Falcon will have the right to purchase half of the total NSR (1 percent), at any time up to commencement of production for a one-time payment of $ 400,000. The transaction is subject to TSX Venture Exchange approval.