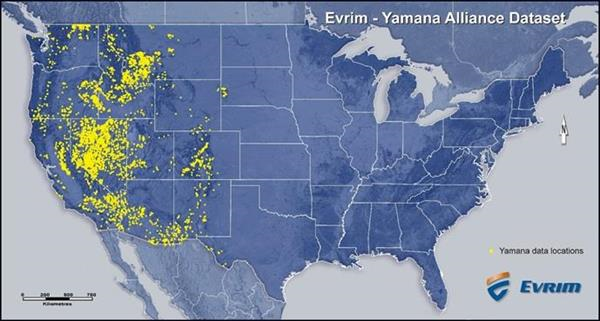 The Alliance allows Evrim royalty free access to Yamana’s dataset in the western United States for gold and base metal project generation.

The dataset contains information from more than 7,000 locations ranging from early stage exploration to advanced projects and represents approximately 30 years of exploration work completed by Meridian and predecessor FMC Gold Co.  The dataset covers a large portion of the western United States with a particular focus on Nevada.

Evrim’s president and CEO Paddy Nicol said: “The dataset consists of digital and non-digital data with proprietary non-public information that has not been reviewed for many years, making it a unique and valuable asset.

“Western United States represents a new mining and exploration jurisdiction for Evrim and reinforces our strategy to gain competitive advantages in areas in which we operate.  We look forward to applying our skillset to identify new opportunities with this under-utilized dataset.”