Owned and operated by Equinor, WA-542-P is located west of the recent Dorado oil discovery 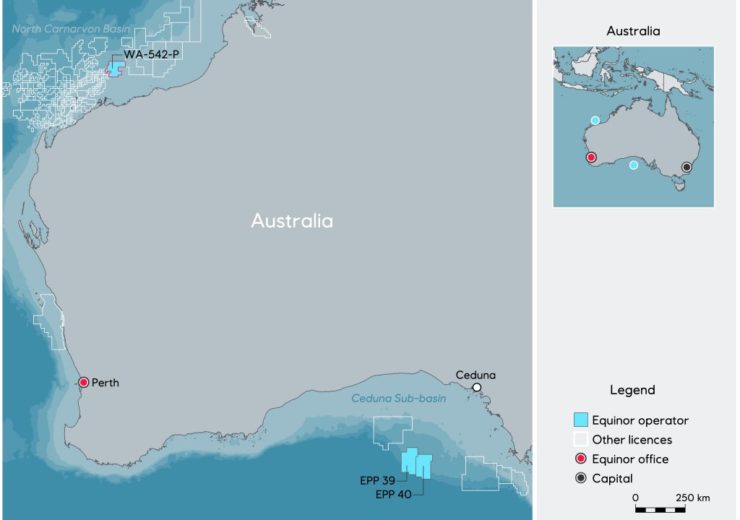 The new exploration permit, WA-542-P, will be 100% owned and operated by Equinor. The permit is located west of the recent Dorado oil discovery.

Equinor international offshore exploration senior vice-president Paul McCafferty said: “We are pleased with this award which expands our position in Australia with an exploration opportunity in a proven basin.

The block, which covers 4815km ², lies about 100km from the Australian coast

Equinor said it plans to undertake geological studies and 3D seismic data acquisition on the WA-542-P licence. Covering 4,815km ², the block lies about 100km from the Australian coast and in water depth ranging from 80-350 meters.

McCafferty added: “An interesting new liquids play has emerged in this part of Australia’s northwest shelf and we are looking forward to assessing the potential in our new permit.”

Equinor serves as the operator for EPP39 and EPP40 in the Ceduna Basin offshore South Australia.

Claimed to be one of the biggest oil fields in the greater North West Shelf, Dorado is estimated to hold 448 million barrels of oil-equivalent (Mboe).

In June 2019, Santos and its partner Carnarvon Petroleum said that the drilling of the Dorado-2 appraisal well has confirmed the pre-drill expectations of the Dorado discovery offshore Western Australia.

The appraisal well encountered an oil-water contact in the Caley reservoir, which was the primary target. According to Carnarvon, high-quality oil was drawn from the reservoir and reservoir properties were found to be excellent and on part to those discovered during the drilling of the Dorado-1 well.