The small oil discovery has been made in the Lille Prinsen Outer Wedge well, located about 1km west of Lille Prinsen Main, where oil was discovered in 2018 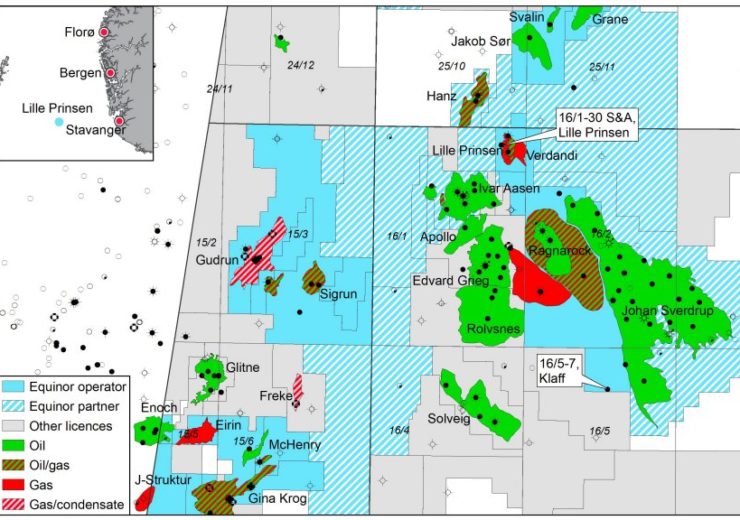 Norwegian multinational energy company Equinor, along with its partners Lundin and Spirit Energy, has announced a small oil discovery in production licence 167 at the Utsira High in the North Sea.

The Lille Prinsen Outer Wedge is located 200km west of Stavanger and 5km north-east of the Ivar Aasen field.

Equinor said that the discovery in the main reservoir is currently expected to contain 5 million to 25 million barrels of oil in-place. Commercial nature of the discovery is yet to determined.

Equinor stated: “Evaluation of other segments in Lille Prinsen, and former discoveries in shallower formations, will determine the need for further appraisal of Lille Prinsen.”

Along with Lille Prinsen, the company has also recently made an another small-size oil discovery in the Klaff well in PL 502, located approximately 1km west of the Johan Sverdrup oil field in the central part of the North Sea.

Discovered in the fractured basement rock,  it is currently not possible to determine whether the oil is recoverable, the company said.

Recently, Equinor Energy and its partners ExxonMobil and Vår Energi have started the production from the Trestakk field in the Norwegian Sea.

The Trestakk oil and gas field is contained in Block 6406/3, in production license PL091, is located approximately 20km southeast of the producing Åsgard field.

The company said that the Trestakk field has been tied back to the Åsgard A floating production vessel for processing and gas injection.

The field lying in water depth of approximately 300m is estimated to have recoverable resources of 76million barrels of oil in place, and its development involved a subsea template having four well slots, and a satellite well.