The solar park is the largest single-site solar park in the world, based on the Independent Power Producer (IPP) model 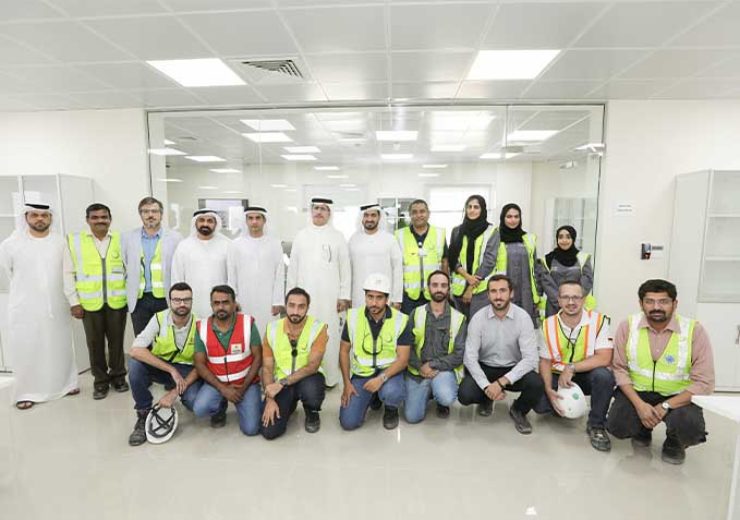 Image: Officials from DEWA among others. Photo: courtesy of Dubai Electricity and Water Authority.

HE Saeed Mohammed Al Tayer, MD & CEO of Dubai Electricity and Water Authority (DEWA), has reviewed progress on the 800MW 3rd phase of the Mohammed bin Rashid Al Maktoum Solar Park. The solar park is the largest single-site solar park in the world, based on the Independent Power Producer (IPP) model. It will generate 5,000MW by 2030 with investments of up to AED 50 billion.

DEWA is building the 800MW 3rd phase of the solar park using photovoltaic (PV) technology in three stages, in partnership with a consortium led by Abu Dhabi Future Energy Company (Masdar) and EDF Group, through its subsidiary EDF Énergies Nouvelles. This solar plant is the first of its kind in the MENA region, with an advanced solar tracking system to increase generation efficiency by 20-30% when compared to fixed installations. DEWA achieved a world record in the cost of PV solar power for this phase of the solar park, at a Levelised Cost of Energy (LCOE) of USD 2.99 cents per kilowatt-hour, using PV solar panels.

Al Tayer visited the 300MW second stage of the 800MW phase which started operations from mid-August 2019. Al Tayer was also briefed by Fawaz Al Muharrami, CEO of Shua’a Energy 2 on the construction progress of the third stage, started earlier this year that will be operational in 2020.

The first stage has a capacity of 200MW and became operational in May 2018. It uses unique technologies, including over 800,000 solar modules that use robots to maintain efficiency. This stage provides over 60,000 residences with electricity, reducing over 270,000 tonnes of carbon emissions every year.

DEWA established Shuaa Energy 2 with a 60% stake in the company in partnership with the Masdar-led consortium, and Électricité de France (EDF), through its subsidiary EDF Énergies Nouvelles. The consortium owns the remaining 40% of the company; Masdar owns 24% and EDF Énergies Nouvelles owns 16%. The international consortium, led by the renewable energy contractors GranSolar and Acciona from Spain and Ghella from Italy, is handling the engineering, procurement, and construction (EPC).

The Mohammed bin Rashid Al Maktoum Solar Park will be completed by 2030 with a total planned capacity of 5,000MW and will consist of both solar PV and concentrated solar power (CSP) technologies. The solar park aims to reduce over 6.5 million tons of carbon dioxide emissions yearly upon completion. It will provide jobs and develop the expertise of UAE nationals in the field of renewable energy.

DEWA aims to reach 5,000MW by 2030, in order to achieve the objectives of the Dubai Clean Energy Strategy 2050, to produce 75% of Dubai’s total power output from clean energy, and make Dubai the city with the lowest carbon footprint in the world by 2050.