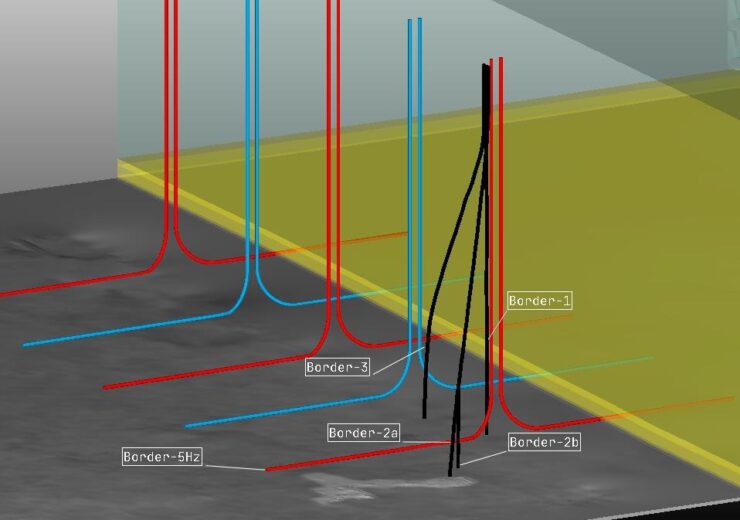 DEEP Earth Energy Production Corp. (the “Corporation” or “DEEP”) is pleased to announce that the spring/summer flow testing program indicates the temperature and flow rates from the geothermal reservoir in the Deadwood Formation are sufficient to support multiple geothermal power facilities. DEEP will commence drilling this month with the deepest horizontal well to date in Saskatchewan’s history, allowing for the installation of a large diameter submersible pump. This initial horizontal well will be the first step in constructing the first geothermal power facility in Canada. Early power generation technology is being sourced for immediate self- generation, supplying power for drilling, testing and construction activities for the Williston Basin’s first 20 MegaWatt (MW) geothermal power plant, which can supply enough power for approximately 20,000 households.

Thermal imaging video captured by drone on August 20th, showing the production and injection loop test between wells Border-3 and Border-1 can be viewed here.

“This is a first for Canada – and it’s the beginning of something big. Geothermal energy can create lots of jobs in Western Canada and across the country – all while helping us get to net zero,” noted The Honourable Seamus O’Regan, Minister of Natural Resources Canada.

Previous winter drilling and testing demonstrate that the vast and predictable hot sedimentary aquifer at the base of the Williston Basin can support multiple 20 MW baseload geothermal power facilities. Flow tests and injection tests have demonstrated consistent and repeatable results in the Deadwood Formation sandstone. Testing of the Border-4 well, located 7 kilometres to the west of the main project site, demonstrated the same consistent production rates.

As shown in the video link above, the first geothermal production and injection “loop” test of its kind in Canada has been in operation since July 31, 2020, using Border-3 as the production well and Border-1 as the injection well. The reservoir and the wells – which are about 750 m apart – are performing at or above expectations with no operational issues. Hot (122°C) brine is brought to the surface from a vertical depth of approximately 3,500 metres (m) using an electric submersible pump (ESP) installed at a depth of 2,800 m. At surface, the brine flows through containment tanks before being re-injected back into the same formation. A chemical tracer injected into Border-1 at the start of the loop test and daily water sampling are providing valuable data to better understand fluid flow dynamics and reservoir parameters.

DEEP has completed a preliminary subsurface design that optimizes the well spacing and configuration to produce 20 MW of geothermal power using ten horizontal wells (6 producers and 4 injectors). Each well will be drilled to a vertical depth of approximately 3.5 kilometers (km) and a horizontal length of approximately 2 km.

The upcoming horizontal well – Border-5HZ – is designed to optimize flow rates and contact  with the reservoir. After completing the current loop test, Border-3 will be converted for use as an injection well to enable the full-scale commercial loop test, producing from Border-5HZ and injecting into Border-1 and Border-3. Border-2B will be used as a monitoring well.

“We will produce enough high temperature volume from this first horizontal well to generate power utilizing Organic Rankine Cycle technology,” said Kirsten Marcia, DEEP President & CEO. “We are in the process of procuring a temporary 200-400 kilowatt system, providing on- site power during the upcoming construction phase. It’s an exciting step.”

The resource and surface facilities engineering work to confirm the feasibility of the first 20 MW project is expected to be complete in Q1 2021. The feasibility analysis will be based in large on the results of the large volume horizontal well loop test, leading to the final construction design in the Bankable Feasibility Report.

DEEP gratefully acknowledges the continued support from Natural Resources Canada for the funding announced in 2019 and for their ongoing support in the development of Canada’s first geothermal power project. By re-deploying world class oilfield expertise on a renewable energy project for the first time in Canada, this Federal funding is providing employment opportunities in a sector hard hit by job losses. New opportunities created from this geothermal power project, such as heating for greenhouses and aquaculture (fish farming), will be a welcome economic boost for the province.

We are also grateful to the Government of Saskatchewan for their continued support for the energy industry in the province. With their support, DEEP’s innovative clean energy project will demonstrate sustainable power for Saskatchewan, making progress on its emissions reduction goals. Like many other energy projects, progress on DEEP’s geothermal power project would  not have gone forward without the support and guidance from the Ministry of Energy and Resources, the Ministry of Environment and SaskPower. Working together, regulatory and permitting processes for geothermal energy were developed, facilitating progress on geothermal power production and innovative uses of geothermal heat for sustainable food growing opportunities.