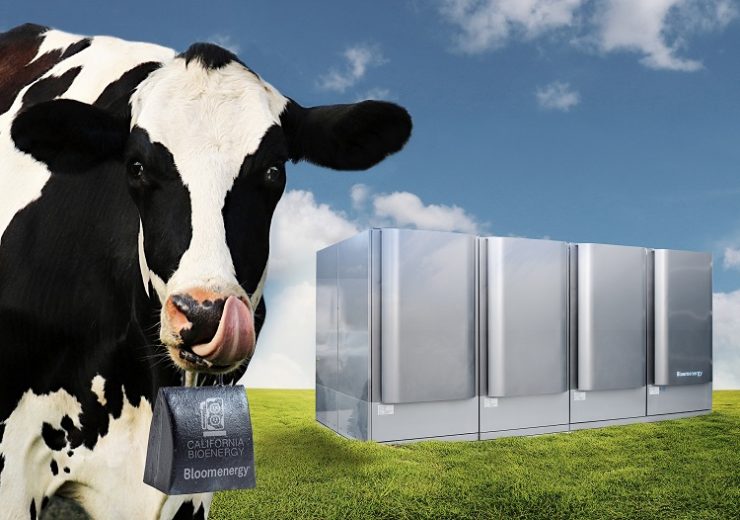 Bloom Energy (NYSE: BE) and California Bioenergy LLC (CalBio), today announced a collaboration to deploy the companies’ commercial solution for the conversion of dairy waste into renewable electricity without combustion.

CalBio’s dairy digester technology with Bloom Energy’s solid oxide fuel cell technology delivers an end-to-end solution for the capture of methane and generation of renewable electricity. The solution has been designed such that the electricity will power electric vehicles (EVs) throughout California. In integrating these proven technologies, the two companies have created the world’s first commercial solution to generate non-combusted electricity from dairy waste to power EVs.

Today, most California dairies are making plans to install digesters to capture biogas from their cow manure and are looking for a cleaner way to utilize this fuel. Biogas captured from cow manure contains approximately 65 percent methane, which has a 25 times greater impact on global warming than CO2 emissions and accounts for 10 percent of U.S. greenhouse gas emissions, but is also a useful, renewable fuel.

The CalBio-Bloom Energy solution not only produces clean electricity, it also removes methane that would otherwise have been released into the atmosphere. Capturing and utilizing waste methane is a powerful way to positively and quickly impact climate change.

CalBio digesters capture biogas, primarily consisting of methane, released from the anaerobic decomposition of dairy manure. CalBio’s technology also separates hydrogen sulfide from the biogas. The biogas is then converted to renewable electricity in a Bloom Energy Server through an electrochemical process. The Bloom Energy Server is the world’s most efficient electricity generator. It produces twice as much electricity as conventional combustion generators using the same amount of biogas.

Once generated, all of the renewable electricity can be transmitted via the electric grid to EV charging stations throughout California.

Today, emissions generated by EV charging vary according to when EVs are plugged in to charge. For example, at night, California draws the largest portion of its electricity from burning natural gas or from imported power, including coal, so EV charging may not be very clean at all. Going forward, any EV network buying electricity from a CalBio-Bloom Energy dairy project will be able to provide their customers renewable electricity.

There is an estimated 320 megawatts of economically viable dairy biogas in California. With significant deployments of dairy digesters occurring throughout the California dairy industry, there is need for an on-site power generation solution that uses the captured biogas to generate renewable electricity without combustion.

The state of California has set ambitious goals to reduce all greenhouse gas emissions, including methane. In order to advance these goals, the state provides grants and sets policy through the California Air Resources Board (CARB) and Department of Food and Agriculture (CDFA). Both small and large dairies deploying the new CalBio-Bloom Energy biogas solution will be eligible to apply for CDFA grants. CARB’s Low Carbon Fuel Standard (LCFS), meanwhile, creates value for low carbon fuels, enabling EV charging operators to buy the renewable energy credits generated by dairy farmers to meet carbon reduction goals.

California’s Central Valley, and especially the San Joaquin Valley, where many dairies are located, has some of the worst air quality in the United States, as well as the highest rates of childhood asthma in California. Using fuel cells to generate electricity from dairy biogas, instead of combustion engines, eliminates smog-forming emissions, and improves air quality and public health. Charging more EVs with renewable electricity will contribute to air quality improvements throughout California, called for under the Governor’s Executive Order for five million zero-emission vehicles by 2030.

“The urgency of the fight against climate change and unhealthy air quality requires us to slash potent, super-pollutant emissions, including methane from agriculture, and get combustion out of our energy and transportation systems,” said Mary Nichols, chair of the California Air Resources Board. “This solution is a trifecta – slashing methane, avoiding combustion from electricity generation, and supporting our transition to electrified transportation.”

“Our California dairy families play a critical role in producing nutritious, high-quality milk and dairy products, while, at the same time, engaging in air, water, and environmental sustainability efforts,” said Karen Ross, secretary of the California Department of Food and Agriculture. “This is a great example of the partnerships needed to advance technologies from the Silicon Valley and agriculturally rich Central Valley in order to move the needle further in renewable energy from dairies.”

“While the San Joaquin Valley is already subject to the most stringent air quality regulations in the nation, innovative programs such as this, which assist in deploying the latest clean air technologies, play a vital role in addressing the Valley’s air quality challenges,” said Samir Sheikh, air pollution control officer and executive director for The San Joaquin Valley Unified Air Pollution Control District.

“In bringing together the best technology from Silicon Valley with the best technology from the Central Valley, we’re really doing something special for California,” said N. Ross Buckenham, CEO of CalBio. “With Bloom, we have found an ultra-clean “on-dairy” biogas system that can scale from small to large dairies, with attractive economics for the capture and utilization of methane. We’ll create local jobs, generate income for dairy farmers, help the environment by reducing greenhouse gases and fossil fuel consumption and greatly improve local air quality.”

“To achieve its ambitious climate goals, California has to embrace every innovation that can make a difference in reducing greenhouse gas emissions,” said KR Sridhar, founder, chairman, and CEO of Bloom Energy. “We’re proud to be tackling both the causes and consequences of climate change through this innovative collaboration with CalBio, and through the clean energy that Bloom provides to California businesses every day.”