Boomtown Oil and Rocky Creek Resources have reported a hydrocarbon discovery in the Eagle Ford through the drilling of the Five Star 1H well in the Lavaca Trough along with two other recently drilled wells, the Kloesel 1H and Shiner 1H. 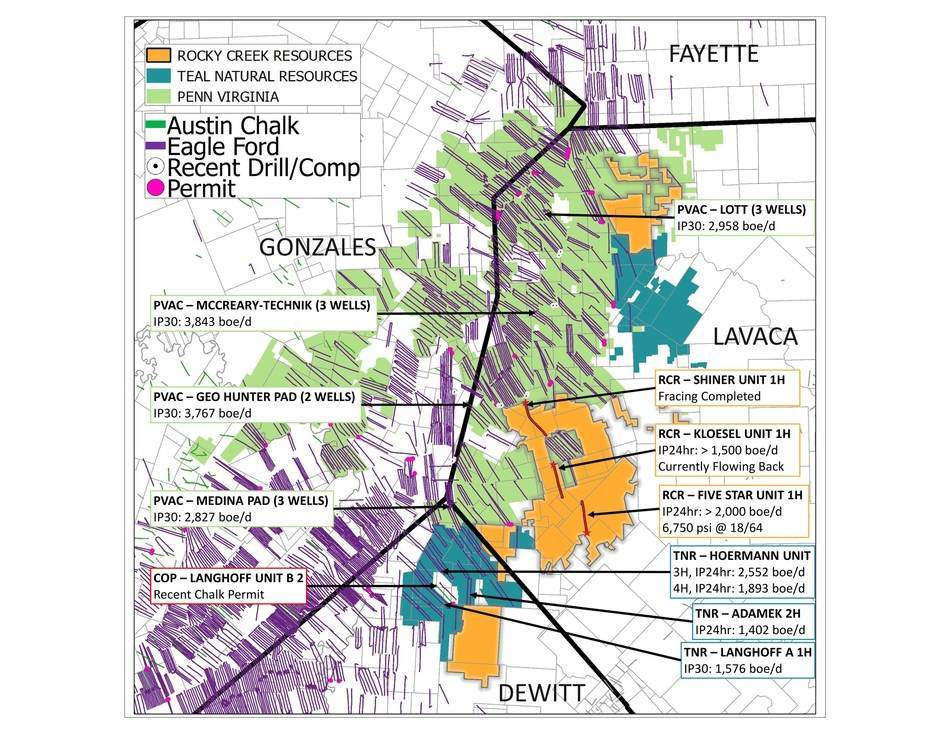 Rocky Creek Resources is a joint investment between Boomtown, Juniper Capital Advisors, and Delago Resources focused on the Eagle Ford and Austin Chalk formations in Lavaca and DeWitt Counties.

“The Five Star 1H, with an initial rate of over 2,000 BOEPD (63% liquids) on an 18/64″ choke and 6700 PSI FTP, is in-line with some of the best wells in the Karnes Trough of Karnes County, proving the geologic thesis of the look-alike Lavaca Trough,” said Michael Rozenfeld, geology partner at Boomtown Oil. “As the second largest Eagle Ford acreage holder in Lavaca County after Penn Virginia (PVAC), this well solidifies the outstanding value-proposition in our 26,000 net acre position within the highly-over pressured oil window in both Lavaca and northern DeWitt counties.”

“We would like to thank our drilling partner, Helmerich and Payne IDC (HP) and completion partner, Liberty (LBRT) whose industry-leading technologies allowed us to efficiently drill some of the longest wells and complete some of the most intense frac jobs in the play,” said Hakim Benhammou, operations partner at Boomtown Oil. “We plan to use our learnings from these three wells to further refine our drilling & completion practices across our overall acreage position, which allows for hundreds of long-laterals to multiple benches in this geological setting.”

Boomtown’s second well, the Kloesel 1H which is still in early-stage flowback, is currently producing ~1,500 BOEPD (75% liquids) on an 18/64″ choke. The Shiner 1H, an offset to PVAC’s exceptional Lager 3H well, was very recently completed and has just begun flowback.

“As I recently discussed at the Hart Energy DUG conference, the Eagle Ford is primed to be the resurgent leader in low-cost, high-productivity oilfield operations with its consistent geology and its enviable access to services and markets which results in superior well-level economics,” said Sean Fitzgerald, CFO at Boomtown Oil. “We feel very fortunate to have been able to establish our current acreage position in close proximity to the best operators in the play, and we are excited about our recent well results.”

Juniper Capital Advisors is a Houston-based upstream-focused private equity provider with over $1.2 billion of assets under management (as of September 30, 2018) and investments across numerous oil & gas basins in the United States.

Boomtown Oil is a Houston-based, privately-owned company with current assets and operations in Lavaca, DeWitt, and La Salle counties.