Bilfinger subsidiary Bilfinger VAM Anlagentechnik has secured a contract to deliver a distribution pipeline construction for use in the pumped-storage power plant in the southern German city of Gaildorf. 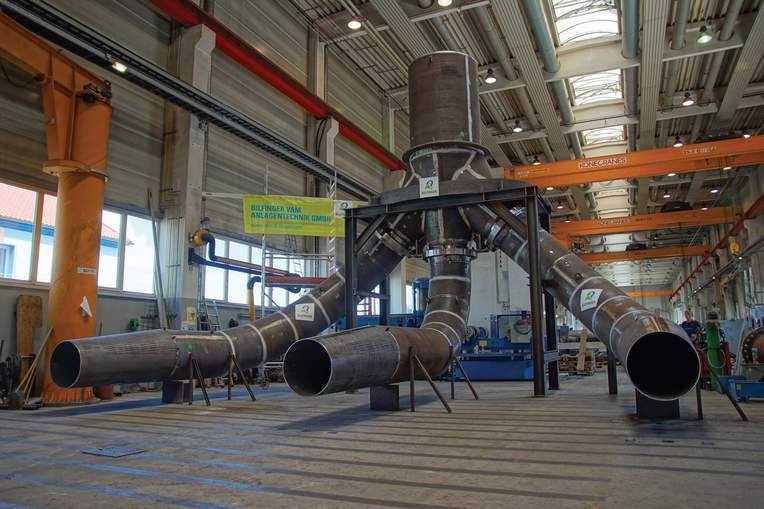 Image: The distribution pipeline used during the trial assembly in the workshop. Photo courtesy of Bilfinger SE.

The order was awarded by Naturspeicher GmbH, in which the Max Bögl group is a shareholder.

“We are delighted that our experts’ many years of experience is being called upon for this pilot project and that we can thus make a contribution to the ecologically-friendly and sustainable storage of electricity”, says Stephan Ebner, Business Unit Head Hydropower at Bilfinger VAM Anlagentechnik.

The water battery in Gaildorf is easy to explain from a technical perspective. The upper reservoirs of the pumped-storage power plant are integrated into the tower base of the wind turbines. The additional hub height that is gained as a result simultaneously contributes to a greater wind yield. An underground pressure pipeline made from polyethylene (PE) that leads into the valley connects the reservoir with three pump turbines with 5.3 megawatts (MW) each.

“To be able to develop an efficient storage concept, it was absolutely essential for us to integrate state-of-the-art technology like the Bilfinger distribution pipeline in the pumped-storage powerhouse”, says Jürgen Joos, Commercial Director at Max Bögl Wind AG. “The water battery achieves an efficiency level of nearly 80 percent and can switch from electricity production to storage in just 30 seconds. Flexible short-term storage solutions such as this one are, in our view, vital to the future expansion of renewable energies.”