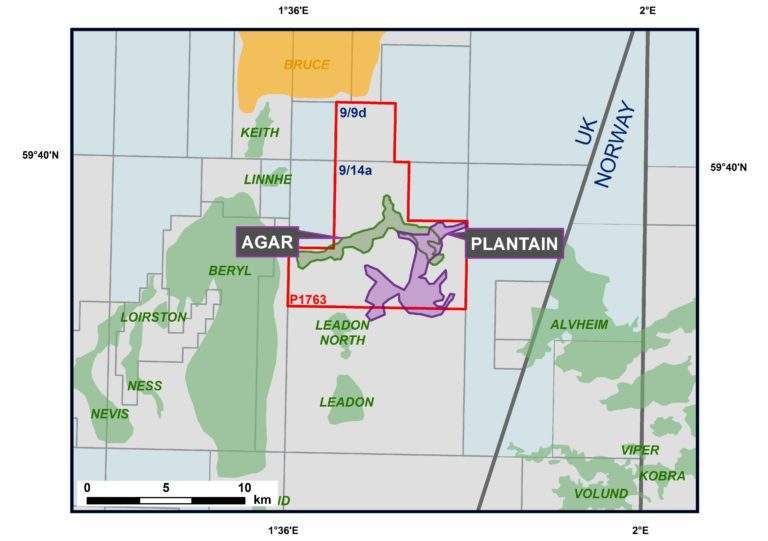 Catalyst also announces that it has signed a contract to secure the Transocean Leader to drill the well on Agar Plantain in Q3 2018.

Cairn will join Catalyst for 50% of the sole risk drilling activity on the Agar Plantain opportunity and 25% of the wider P1763 Licence, with existing partners Apache Corporation.

Catalyst is now in the final stages of planning for the well, and subject to receipt of regulatory approvals, the well will be spudded in Q3 2018.

Catalyst will retain operatorship for the proposed appraisal well with Cairn acquiring an option to take over operatorship in the future with respect to the Agar Plantain project.

The Agar Discovery and Plantain Prospect

Catalyst holds a 50% interest in blocks 9/9d and 9/14a, which contain the Agar Discovery and the Plantain Prospect.

Catalyst made the Agar Discovery in 2014 with the 9/14a-15A exploration well which encountered 33ft column (oil-down-to) in high quality Eocene Frigg Formation sands.

Azinor Catalyst exploration director Henry Morris said:  “We are delighted to welcome Cairn onto the licence as we move towards drilling. As a company with a strong and successful North Sea pedigree, we regard Cairn’s farm-in as further validation of the exciting potential of the Agar Plantain opportunity.

“Our technical teams have been working together to refine the final elements of the well plan and we are enthusiastic about the potential we are seeing.

“We are also pleased to have signed a contract with Transocean to secure the services of the Transocean Leader semisubmersible to drill Agar Plantain. Subject to receipt of final regulatory approvals we expect to spud in Q3 2018.”