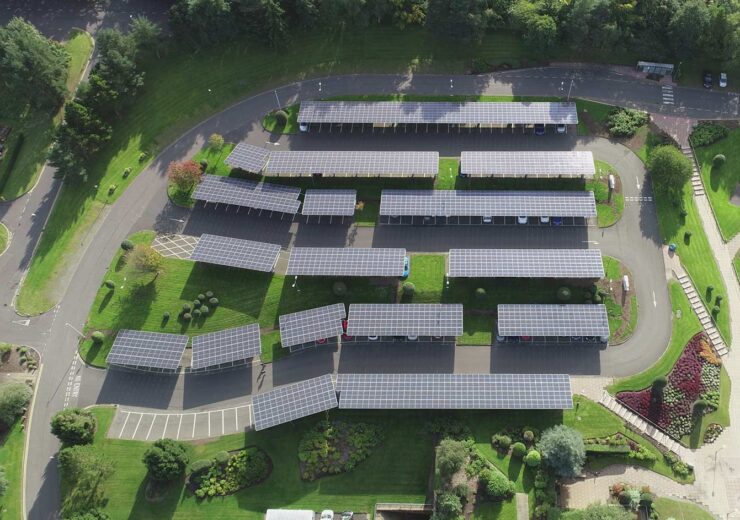 Aviva, with support from the Scottish Government, has launched one of the UK’s largest combined solar carports and energy storage facilities at its Perth office.

Aviva’s facility will be powered by cutting-edge Tesla Powerpack technology and is expected to contribute to a combined annual carbon emission saving of nearly 400 tonnes, equivalent to powering over 500 homes’ electricity for one year or the equivalent of a small town*. It means Aviva’s Perth office can go off grid for five hours every day when the national grid is at its busiest, [using three quarters of the solar power generated]. The surplus energy will go to the battery for later use or exported to the grid.

Aviva employs approximately 2,000 people in Scotland, with around 1,000 people based in its Perth office, which hosts our property claims centre of excellence for both commercial and personal property.

This initiative, which will see climate change tackled at a local level and supports the Scottish Government’s Low Carbon Infrastructure Transition Programme (LCITP) nationally, reinforces Aviva’s longstanding commitment to public-private collaboration and being a positive environmental and social influence. This investment represents an important milestone in the development of sustainable buildings and infrastructures in Scotland and the UK and supports the government’s electric vehicle (EV) incentive scheme. Aviva research found that 35% of Scottish people believed there is a lack of electric infrastructure in Scotland, though more than 2 in 5 drivers, who currently own a petrol/diesel car say they would be more likely to transition to electric vehicles with government or employer support.

The solar and energy storage project in Perth builds on Aviva’s commitment to tackle climate change right across its business. It was the first carbon neutral international insurer in 2006 and is a member of the United Nation’s Net Zero Asset Owner’s Alliance, which commits to net zero emissions in investments by 2050.

Aviva has several environmental initiatives across its UK sites including the installation of a solar carport at its Norwich office, only using electricity certified by the carbon trust and onsite beehives.

Nick Amin, Aviva Chief Operating Officer, said: “It’s vital that businesses in all industries put words into action when it comes to tackling the climate emergency. That’s why we are taking strides to reduce our environmental impact and partner with leading technology specialists to help make that happen. The Perth solar and storage initiative is a great example of how Aviva is innovating to secure a sustainable energy supply and support the electric vehicle revolution.”

David Skinn, Aviva Distribution Director based in Perth, said: “Scotland is a country that has long been known as a pioneer in the energy sector, and so it is fitting that Aviva has built the UK’s leading solar and storage facility in the heart of Scotland. With the build up to COP26 gaining momentum, people in Scotland, and across the UK, expect more to be done in the fight against climate change, so we’re delighted to be playing our part alongside the Scottish Government to save and create energy.”

“Aviva is providing an excellent exemplar for businesses across Scotland, as well as demonstrating innovation in the use of our vast renewable energy potential as we move towards an energy system that is consistent with net zero greenhouse gas emissions by 2045.”