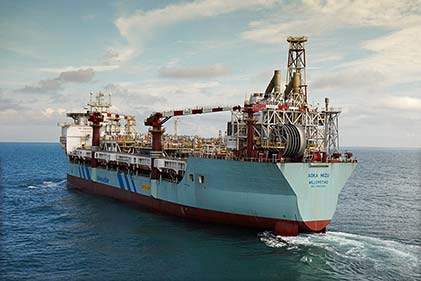 The Aoka Mizu FPSO, which had undergone repair, upgrade and life extension works at the Drydocks World Dubai shipyard followed by completion of sea trials, will sail to Rotterdam for wrapping up a final scope of work before heading to the Lancaster field.

The seventh Bluewater designed, built, owned and operated FPSO will be deployed by Hurricane Energy for the early production system (EPS) development of the offshore UK oil field.

Currently, Hurricane Energy is moving ahead towards the first phase of development of the Lancaster field through the EPS, which will involve a two well tie-back to the Aoka Mizu FPSO. The Lancaster field EPS is anticipated to initially produce 17,000 barrels of oil per day with first oil targeted for the first half of 2019.

Located in the West of Shetlands area in blocks 205/21a, 205/22a and 205/26b in license P.1368 Central, the Lancaster field is contained in relatively shallow water of depth of around 160m. It was the first basement prospect drilled by Hurricane Energy in 2009.

In late 2017, the company’s EPS field development plan approval was approved by the UK government. This was preceded by a final investment decision taken on the development of the Lancaster EPS.

In September 2017, Hurricane Energy gave a contract to Transocean to use the Paul B. Loyd Jr. semi‐submersible drilling rig to complete the previously drilled Lancaster 205/21a‐6 and 205/21a‐7Z horizontal production wells.

Hurricane Energy had also given a contract to TechnipFMC for the Lancaster oil project, which included procurement and fabrication of the main subsea components, subsea umbilical, risers and flowlines (SURF) and subsea production system (SPS).

SURF is the final phase of the offshore installation program in preparation for the arrival of the Aoka Mizu FPSO.