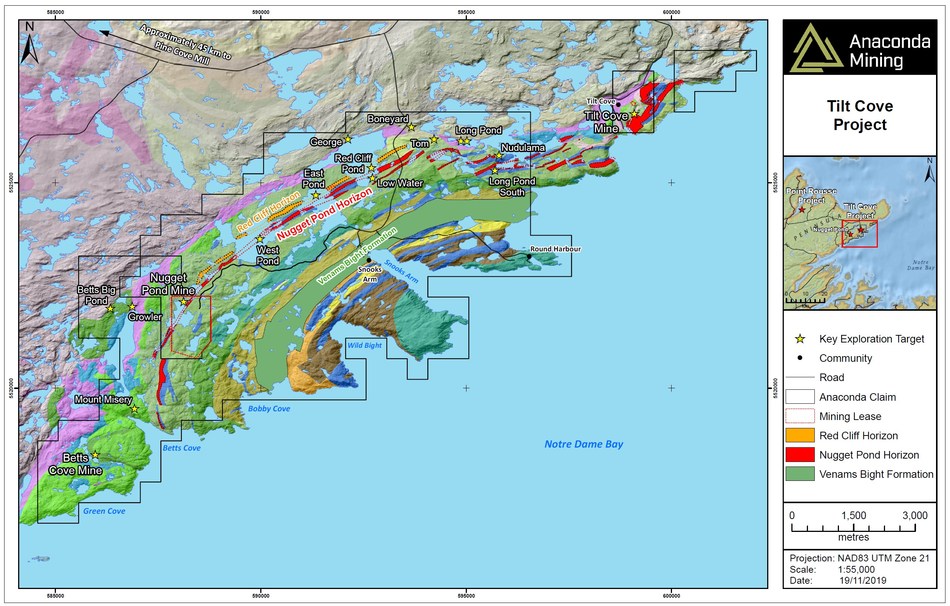 Anaconda Mining Inc. (“Anaconda” or the “Company”) (TSX: ANX) (OTCQX: ANXGF) is pleased to announce the initiation of trenching and drilling at key exploration targets at the Tilt Cove Gold Project (“Tilt Cove”), located within the Baie Verte Mining District in Newfoundland, approximately 45 kilometres by road from the Company’s Pine Cove Mill (Exhibit A). Tilt Cove is a significant, recently consolidated land package encompassing the same geological trend as the past producing, high-grade Nugget Pond Mine, which had an average recovered grade of 9.85 g/t gold. Tilt Cove covers a 20-kilometre strike extent of the Betts Cove Complex, a highly prospective geological terrane including the Nugget Pond Horizon, the iron-rich sedimentary unit that hosts the past-producing Nugget Pond Mine (Exhibit A).

Since providing an update on September 5, 2019, Anaconda has received final results from a LiDAR survey over the entire area, detailed drone magnetic survey (453 line-kilometres) covering the Nugget Pond Horizon and assays from all soil (2,335) samples and prospecting (1,045) samples. From these data sets the following advances have been made:
Discovered the new Growler Showing with seven grab samples ranging in grade from 2.11 to 5.68 grams per tonne (“g/t”) gold, with similarities to Nugget Pond-style gold mineralization (Exhibit A and B);

Discovered a new prospective iron formation, the Red Cliff Horizon, in the footwall of the Nugget Pond Horizon with a 6 km strike, establishing two potential host rocks for Nugget Pond-style gold mineralization in this area (Exhibit A and B);

Acquired new land adjacent to the Growler Showing that hosts the Betts Big Pond Showing with historic grab samples up to 60.66 g/t gold and chip samples of 8.19 g/t gold over 2.3 m;

Initiated a trenching program and a diamond drilling program of up to 4,000 metres, including initial trenching and 1,000 metres of drill testing at the Growler Showing, West Pond and Red Cliff Pond targets (Exhibit B).
“Based on data from our recent comprehensive exploration evaluation program, combined with historical data, we have identified exciting new opportunities for discovery at the Tilt Cove Gold Project and have initiated trenching programs and drill testing of these targets. The identification of the Red Cliff Horizon parallel with the Nugget Pond Horizon over a six-kilometre strike means there are now two potential host rocks for Nugget Pond-style gold mineralization in this area. We have also discovered the Growler Showing, which bares similarities to Nugget Pond-style gold mineralization and is located in the immediate hanging wall of a large-scale fault system and acquired another property hosting the Betts Big Pond Showing. The Growler Showing is currently being tested through trenching and drilling, with drilling at the West Pond and Red Cliff Pond targets to follow. We expect to complete these initial trenching and drilling programs by the end of the year and anticipate commencing a second phase of drilling at Tilt Cove in the new year.”