Affinity is focused on the acquisition, exploration and development of strategic metal deposits within North America 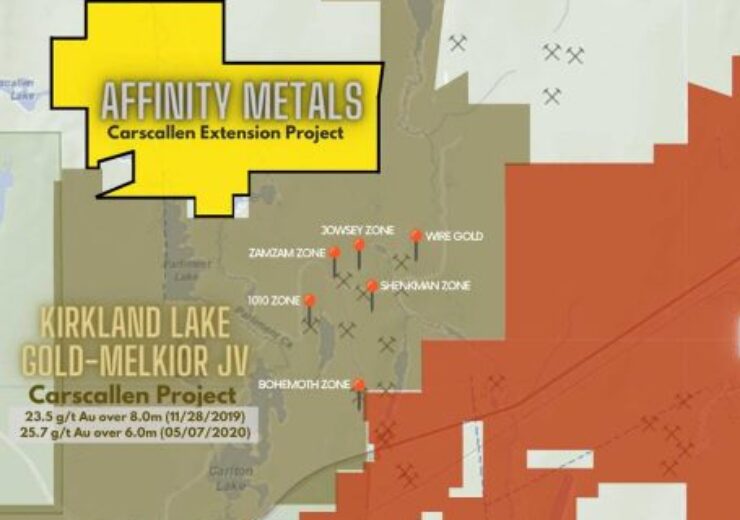 Melkior’s Carscallen property has gained considerable attention in recent months since Kirkland Lake Gold (”KL”) first entered into negotiations to join with Melkior in advancing the property. On September 30th, 2020, Melkior closed a strategic partnership with KL in an option deal worth up to $110 million. The confidence of a major producer like KL entering into an agreement of this size is very promising and shows the potential of this newly discovered gold system.

The Carscallen hosts high-grade gold and has strong indications of a base metal volcanogenic massive sulphide (VMS) system. In a news release dated June 26th, 2020, Melkior reported that to date, they have delineated a potential 800m striking gold system running NW-SE through the Zam Zam and Shenkman Gold Zones that is also open in both directions. The Affinity Carscallen Extension property borders Melkior’s property to the north and is located on trend approximately 1000m NW of the presently defined gold system with similar underlying geology.

Melkior’s Carscallen property and Affinity’s Carscallen Extension property are located on the western end of the Abitibi Greenstone Belt, in the geopolitically stable and resource friendly province of Ontario. Along with the Frasier Institute deeming it the 4th most attractive mining jurisdiction in the world, the Abitibi Greenstone Belt is home to dozens of world class deposits, and has reportedly produced in excess of 170 million ounces of gold, 400 million ounces of silver, 15 billion tons of copper, and 35 billion tons of zinc.

Affinity previously entered into an option agreement for the West Timmins property with the same arm’s length party that also holds the Carscallen Extension property. The West Timmins property was recently drilled by Affinity. An existing single shallow drill hole was extended to 525m in depth in an effort to accomplish two objectives: 1) to test the validity and accuracy of the Stargate Acoustic EM technology to delineate geological contacts, more specifically to define the extent of granite caps which commonly mask the underlying geology within the west Timmins region, and 2) to test the geology immediately beyond the granite cap.

The technology was able to predict the contact where the granitic cap terminated in the hole. This ability to potentially map granitic intrusions and caps at depth, where other geophysical techniques have failed, has far reaching positive implications and potentially opens up many possibilities for increasing exploration success in granitic environments within the Timmins camp and elsewhere.

The geological environment to the 525m depth drilled did not produce any significant precious metal values in the core samples that were assayed.

Given the recent Melkior-KL partnership, and after considerable examination of the regional data specific to the immediate vicinity around Melkior’s Carscallen Project, it was determined that Affinity’s immediate focus and priority should shift away from the Timmins West property to the south and instead to secure the northern Carscallen Extension project and pursue a more aggressive exploration program on this property located on trend to the north and much closer to Melkior’s recent work that attracted KL to the Carscallen property.