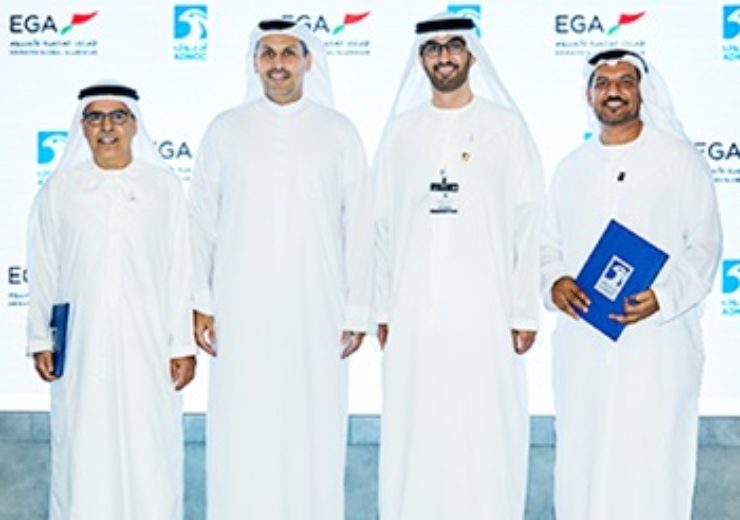 The Abu Dhabi National Oil Company (ADNOC) announced, today, it has signed a long-term agreement with Emirates Global Aluminium (EGA), the largest industrial company in the United Arab Emirates outside the oil and gas sector, to supply EGA with the majority of the calcined petroleum coke produced by its new Carbon Black and Delayed Coker (CBDC) facility in Ruwais.

Calcined petroleum coke is used by EGA in the aluminium smelting process. This new agreement will allow EGA to source up to 40% of its calcined coke requirements from within the UAE, reducing its logistics costs and reliance on imports.

The agreement was signed by Khaled Salmeen, Director of Marketing, Supply and Trading at ADNOC and Abdulla Kalban, Managing Director and CEO of EGA. The signing was witnessed by His Excellency Dr Sultan Ahmed Al Jaber, UAE Minister of State and ADNOC Group CEO and Khaldoon Khalifa Al Mubarak, Chairman of EGA and Managing Director and Group CEO of the Mubadala Investment Company.

H.E. Dr Al Jaber said: “For many decades, ADNOC has been a catalyst for growth, development and diversification in the UAE. This agreement contributes to further increasing the local economic benefit generated from the UAE’s natural resources and deepens ties and integration between two of the UAE’s most important industries. It also underlines ADNOC’s commitment to driving economic growth and diversification in the UAE.

“This partnership will enable ADNOC to maximize the value extracted from every barrel of oil that is produced and processed. ADNOC Refining’s Carbon Black and Delayed Coker complex is central to this strategy. It processes the heavy residue material left over from the refining of crude oil and converts it into more valuable refined products.”

The agreement with EGA also represents the latest milestone in ADNOC’s efforts to eliminate production of high-sulfur fuel oil (or ‘residue oil’) and become a ‘zero-fuel oil’ refining business. ADNOC made zero-fuel oil refining a priority in response to the International Marine Organization’s (IMO) 2020 Regulations. The regulations seek to limit the environmental impact of global shipping fleets by reducing the sulfur contents in marine fuels from 3.5 percent to 0.5 percent.
Al Mubarak said: “Emirates Global Aluminium is one of the UAE’s most critical industrial assets and a world leader in the global aluminium sector. Strengthening local supply chains that connect two of the nation’s most substantial energy and industrial exporters demonstrates the maturity of our economic base.”

Each year, EGA spends over $1 billion in the local supply chain annually. Earlier this year, EGA began production in the UAE of alumina, another raw material required in aluminium smelting. EGA’s Al Taweelah alumina refinery is expected to meet some 40 per cent of the company’s alumina needs once it reaches nameplate capacity, which is expected during the course of 2020.

EGA, which began production in 1979 as Dubai Aluminium, is a pioneer of economic diversification in the UAE. Today the aluminium sector, with EGA at its heart, accounts for 1.4 per cent of the UAE’s GDP and supports 60,000 UAE jobs.