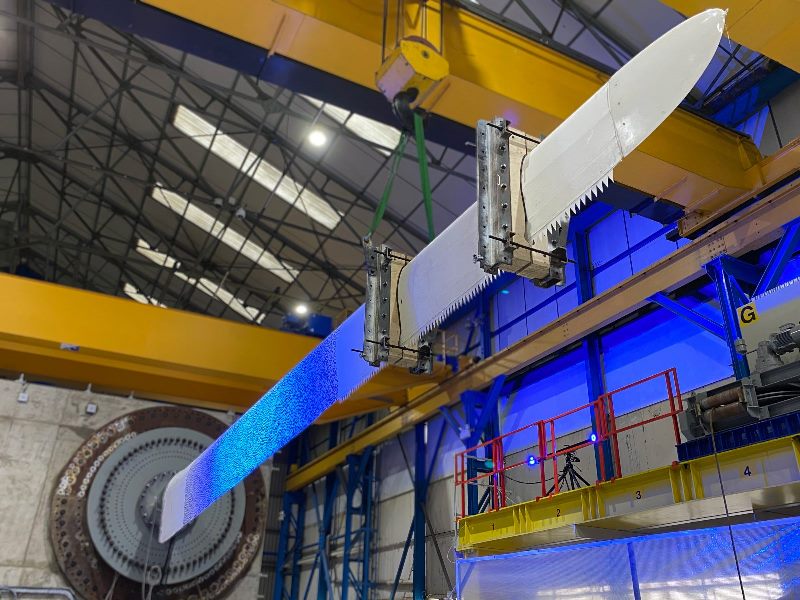 ACT Blade, a spin-off company from UK yacht-sail developer SMAR Azure, has announced that it has successfully completed the first of two tests of its novel lightweight blade for wind farms at ORE Catapult’s National Renewable Energy Centre in Blyth. These tests will pave the way for its first operational deployment later this year.

Made up of an internal composite structure and high-tech textiles, as opposed to the prevailing fibreglass, ACT’s blades are 24 per cent lighter. A lower weight means blades can be made 10 per cent longer than the standard 55 metre blade around today: producing nine per cent more energy and reducing the cost of energy by 6.7 per cent.

This first of two static tests took place at the Offshore Renewable Energy Catapult’s Blade Test Facility in Blyth. Over three weeks, a full-length blade (13m) withstood the world’s toughest simulation of offshore wind conditions, aimed at testing its structural integrity and durability to the limit.

The test results showed that the blade could withstand extreme loads and every type of direction and twist, going beyond those predicted for an in-service turbine. Post-test inspections show it to have held its shape with no damage. The test data–including optically measured strain and deflection results from within the blade textile–are now being analysed to gain a fuller understanding of the blade’s behaviour.

ACT Blade was founded in 2015 as an offshoot of the established yacht-sail design company SMAR Azure Ltd. The team’s ingenious blade concept was based upon the realisation that the light, durable structure of yacht sails could be adapted for offshore wind turbine blades.

“I realised that the offshore wind industry was engaged in the same race as we were in the yacht-racing world: we need to reduce loads and capture more wind power without compromising on durability.”

“Today, I am delighted that after three projects funded by Innovate UK, we have proven our concept. I would like to thank all our partners who have made this breakthrough possible: ORE Catapult, Advanced Materials Research Centre, Advanced Forming Research Centre, the Energy Technology Centre (ETC) and InnoEnergy.”

Over the next six months, ACT Blade will work with the Energy Technology Centre to prepare for installation of three blades on a working wind turbine at the Myres Hill Wind Farm in Scotland, as a further step towards commercialisation of the blade concept.

“This is great news for the development of novel wind turbine blade designs, ensuring we can continue to improve offshore wind productivity and reduce costs, embedding offshore renewables at the heart of the UK’s future energy mix. The ACT Blade team has pushed the limits of what is physically possible, putting UK technology in pole position in the innovation race. It’s also an inspirational story, showing how an Eureka moment can be turned into a future export that could generate billions in revenue for the UK. We’ve come a long way since Sabrina first answered one of our Innovation Challenges back in 2015, and I am excited to see the journey ahead.”