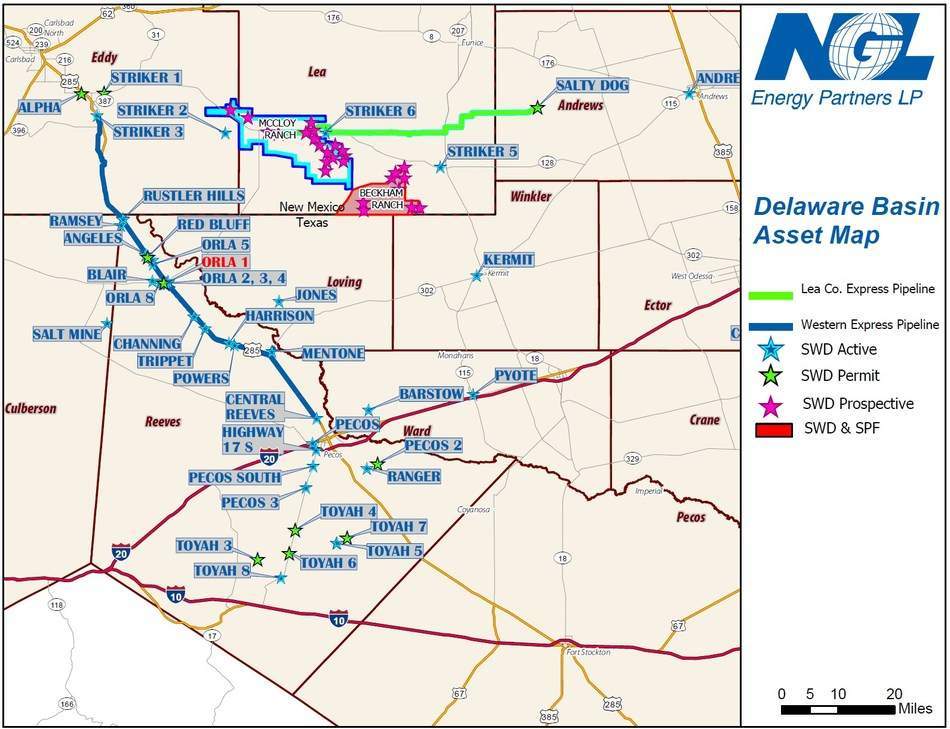 The firm has executed the latest phase of its Delaware Basin water infrastructure strategy.  NGL completed the purchase of the approximately 36,000-acre Beckham Ranch on August 31, 2018.  The Beckham Ranch sits atop the Carlsbad, Capitan, and Jal Water Basins located in southeastern Lea County, New Mexico and includes approximately 9.6 million barrels of annual fresh water rights.  In July 2018, the Partnership acquired the McCloy Ranch, located in Eddy and Lea Counties, New Mexico, consisting of approximately 87,000 acres of land and an associated 2 million barrels of annual water rights in the core of the Delaware Basin in southern New Mexico. These acquisitions add to the Partnership’s available freshwater volumes in the Delaware Basin, which now exceed 30 million barrels annually.

“The ranch acquisitions represent our commitment to the Delaware Basin and development of oil and gas in New Mexico,” stated Doug White, NGL’s Executive Vice President of Water Solutions. “Our ranch investments are the foundation of our development in this major water infrastructure system which will serve oil and gas producers in the area for decades to come.”

These ranch acquisitions are strategic to position the Partnership as the premier provider of a menu of services including freshwater, recycling and treatment, cuttings landfill disposal and produced water disposal in the prolific New Mexico portion of the Delaware Basin.  The Partnership’s approximately 122,000 acre land position (including owned, leased and surface rights) in Lea and Eddy Counties also positions the Partnership to negotiate surface use agreements with producers and utilize its expertise as one of the largest and most experienced midstream water infrastructure companies to provide safe, reliable, and low cost services to oil and gas producers in the basin.  The Partnership is currently in the process of developing multiple water pipelines, including the Lea County Express Pipeline that will originate in the area of the acquired ranches and transport produced water to certain NGL water disposal facilities in Texas and New Mexico.

NGL currently operates 27 active saltwater disposal (“SWD”) facilities with over one million barrels per day of disposal capacity and over a dozen approved permits in the Delaware Basin.  Earlier this year, the Partnership announced the acquisition of 55 miles of pipeline rights-of-way from Pecos, Texas to the New Mexico State Line. This right of way is being utilized for the Western Express Pipeline System in Reeves County, Texas, which includes wastewater transportation pipelines ranging from 16 to 24 inches in diameter, connecting 20 of NGL’s Delaware Basin SWD facilities.  This portion of the Western Express system consists of approximately 750,000 barrels per day of wastewater injection and disposal capacity.  The Western Express Pipeline System is being expanded into New Mexico via two 24-inch pipelines from NGL’s SWDs near Loving, New Mexico to the Texas State Line.  The Western Express Pipeline System is expected to ultimately consist of more than 200 miles of gathering and transportation pipelines connecting over one million barrels per day of wastewater injection capacity spanning from Loving, New Mexico to Pecos, Texas.