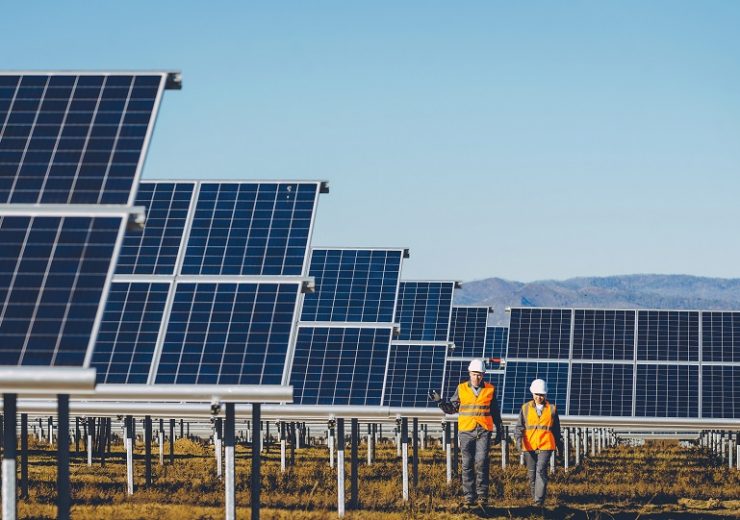 The US is already home to the world's second-largest solar power market, after China (Credit: Mark Agnor/Shutterstock)

More than 100 gigawatts (GW) of solar power capacity has now been installed in the US, marking a doubling in size of the market over the past three and a half years.

A record-setting first quarter of 2021, in which 5GW of new capacity was added, helped surpass the milestone and analysts believe the country can now push ahead to deliver a further 160GW by the end of 2026.

But disrupted global supply chains could have an impact on future growth, with many of the materials used to manufacture and install solar technologies facing price rises as a result of “pandemic-related macroeconomic realities”.

“Long-term policy certainty is the best way to do that, and we’re urging Congress to act this summer.”

Under President Biden, the US is implementing a major low-carbon transformation of its energy system, targeting a fully decarbonised power grid by 2035 and a minimum 50% reduction in its greenhouse gas emissions by 2030.

Proposals made under the president’s sweeping infrastructure plan, which is currently making its way through Congress, to extend tax incentives for solar development beyond their current life-cycle could have “significant implications” for the industry.

During the first quarter of this year, solar accounted for 58% of all new electric capacity installations in the US, with renewable sources dominating other new additions during the period.

That was a 46% year-on-year increase and was driven largely by the utility sector, which installed 3.6GW of new solar capacity. Around 9.5 megawatts (MW) of residential solar was added during the period – an 11% rise compared to the previous year.

Texas was the most active state in the market, with 1.52GW added during the quarter, while Indiana, Virginia, Michigan, and Iowa all made significant additions.

The US ranks second among countries with the most installed solar capacity, trailing China.

The solar Investment Tax Credit has supported the industry’s recent growth and is expected to continue to be “highly influential” over the next three years, driving record growth and investment according to the analysis.

But it also warns supply chain constraints for solar module components – like polysilicon, steel, aluminium, semiconductor chips, copper and other metals – are beginning to impact costs, which could slow the rate of growth.

“There is a lag between commodity prices and subsequent solar system prices, but there’s no doubt this is impacting the solar industry,” said Michelle Davis, principal analyst for power and renewables at Wood Mackenzie, and lead author of the report.

“Installers are managing current equipment shortages and having to decide whether to renegotiate contracts.”

In the face of rising shipping costs, falling availability of microchips, a doubling in the price of steel and a “barely balanced” polysilicon market, solar module costs have either stagnated or risen since the start of the pandemic, reversing a decades-long trend of cost declines.

Supply chain issues have been under scrutiny in the US in recent weeks, as findings were published of a wide-ranging government review of procurement vulnerabilities faced by key industrial sectors, including energy.

While the pandemic has caused unforeseen trade disruptions worldwide, an over-reliance on imports for many materials has emerged as a growing concern in the US, and the White House has made strengthening domestic supply chains a priority item of its policy agenda as it seeks to minimise the impact of bottlenecks overseas.