Greenpeace claims the exploration licences granted by the government are riddled with inaccuracies, based on outdated legislation and were granted for a length of time beyond what UK law permits 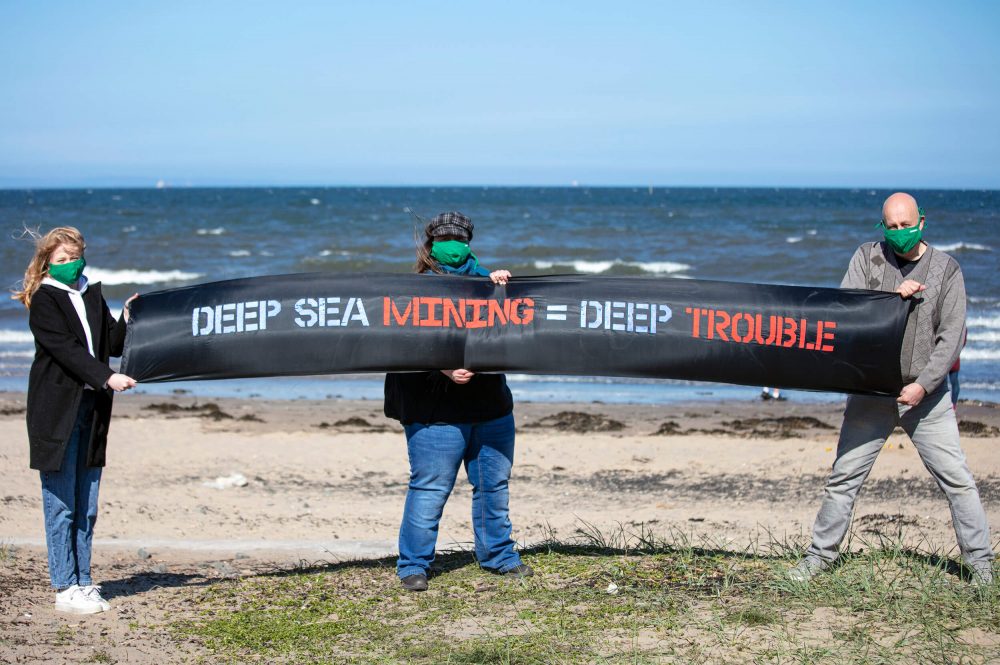 The licences are the first of their kind in the world to be made public following years of pressure from MPs and campaigners (Credit: Greenpeace UK)

The UK government has been warned that deep-sea mining licences it has provided are “error-ridden” and may be unlawful.

Analysis by Greenpeace claims the exploration licences granted by the government to US weapons giant Lockheed Martin’s subsidiary, UK Seabed Resources Ltd (UKSRL), are “riddled with inaccuracies, based on outdated legislation and were granted for a length of time beyond what UK law permits”.

The licences are the first of their kind in the world to be made public following years of pressure from MPs and campaigners, including broadcaster David Attenborough, after they were kept confidential for nearly a decade.

“These licences are riddled with so many errors and inaccuracies that their very lawfulness is thrown into question,” said Louisa Casson of Greenpeace’s Protect the Oceans campaign.

“For nearly a decade, our government has hidden these important documents from public scrutiny, and now it’s clear why – they starkly expose the gap between the government’s rhetoric and its action when it comes to protecting our oceans.”

Deep-sea mining has been a hot topic of debate over the past few years, with environmental campaigner’s arguing there are many unknowns and much to do in ocean science, policy and industry innovations before any deep-sea mining activities should be allowed to take place.

A report earlier this year by the WWF claims industry plans to mine the deep seabed for metals and minerals such as cobalt, lithium and nickel would have a “destructive impact on deep-sea ecosystems and biodiversity”, which could have “knock-on effects on fisheries, livelihoods and food security, and compromise ocean carbon and nutrient cycles”.

The licences received by Greenpeace detail the UK’s responsibilities as a sponsoring state of UKSRL in its exploration for polymetallic nodules on the seabed of the Pacific Ocean.

After the Blue Marine Foundation and Greenpeace UK carried out detailed analyses of the documents, lawyers for the latter wrote a letter to the government in March to set out the issues they have with the licences.

They say they were granted for 15 years from the date of signature of the International Seabed Authority (ISA) contract, despite UK law only permitting the granting of licences for a maximum initial period of 10 years, suggesting they “could be unlawful”.

The letter points out that the licences are based on legislation from 1981, which is “no longer fit for purpose” as relevant UK legislation was revised in 2014 and does not take into account the nation’s accession to the UN Convention on the Law of the Sea (UNCLOS), or the creation of the UN regulator, the ISA.

The licences state the UK shall sponsor UKSRL in its exploitation of the seabed if it meets the conditions of its exploration licences. Greenpeace believes this contradicts the government’s stated position in March 2020 that it “has not agreed to sponsor or support … any exploitation licences for deep-sea mining projects until there is sufficient evidence”.

A further issue the environmental campaigner notes is that exploration areas detailed in the licences are more than twice the size of the area that UKSRL is permitted by the ISA to operate in.

It also claims there is an absence of any clear provisions for Environmental Impact Assessments (EIAs), despite the UK being obliged to ensure its contractor conducts EIAs.

Time for UK ministers to “rethink their deals” with deep-sea miners, says Greenpeace

Casson said the “shoddy licences” are the “latest embarrassment” for the deep-sea exploration industry, after Belgian company GSR’s 25-tonne mining machine got stuck at the bottom of the Pacific Ocean in late April.

In what was the first deep-sea mining test in the Pacific, the robot’s communications cable was severed, putting sensitive ecosystems at risk. The machine has since been recovered, but campaigners argue the incident raises “even more questions about the viability of the industry”.

“With problems spanning the high seas to the corridors of power, it’s time for ministers to rethink their deals with deep-sea miners,” said Casson.

“We don’t know whether other governments’ licences are just as bad or even worse, but we do know that supporting deep-sea mining is not compatible with the UK’s claims to be a global ocean champion.”

Campaigners have been trying to access the licences for more than two years through Freedom of Information requests.

These requests have been denied by the government, with the licences only being released by Lockheed Martin in late March 2021.

In the letter from Greenpeace UK’s lawyers, they have asked policymakers for more information on the licences and the basis on which they were granted, but are yet to receive a response.

“If governments cannot be trusted to get the exploration phase right, what hope is there of them managing potentially environmentally catastrophic deep-sea mining responsibly?” asked Charles Clover, executive director of the Blue Marine Foundation.

“These licences show a clear lack of diligence and oversight on the part of the UK government, highlighting once again the need for a precautionary pause on all deep-sea mining.”

Greenpeace’s analysis notes that corporate seabed exploration must be sponsored by a nation state signed up to UNCLOS.

The US is not party to UNCLOS, or a member of the ISA, meaning weapons giant Lockheed Martin had to obtain sponsorship from a different government, in this case the UK, to explore and exploit deep-sea mineral deposits. It did so by setting up UKSRL, a wholly owned subsidiary of Lockheed Martin.

Greenpeace believes this raises questions about how much due diligence would have been possible before the licences were granted by policymakers to the company.

The licence fees charged by the government to UKSRL are strikingly small, in comparison to those charged by other member states.

“We have agreed not to sponsor or support the issuing of any exploitation licences for deep-sea mining projects until there is sufficient scientific evidence about the potential impact on deep-sea ecosystems, and strong and enforceable environmental standards have been developed and put in place by the International Seabed Authority,” they added.

In its statement, the government said the licences are granted subject to periodic review, meaning they would not be extended beyond 10 years without a review by the Secretary of State, which is “in line with the relevant legislation”.

It claims the licences do include explicit reference to UNCLOS and the ISA, and that UKSRL are acting in line with the prevailing legislation, including the 2014 Deep Sea Mining Act, which enables the deep-sea mining sector to be “regulated in a modern way and aims to prevent damage to the environment”.

The statement said that subsequent to the granting of licences by the UK, the ISA reserved 50% of each area for exploration by developing nations, with UKSRL only permitted to explore the areas specified in its contracts with the ISA.

As the ISA develops its regulatory regime, the government emphasised it is aiming to ensure the regulations protect the “unique ecosystems” on the ocean floor – something it believes represent a “priceless natural heritage”.