Shortly after becoming 46th President of the United States, Joe Biden made key interventions that will change the face of the country's oil industry 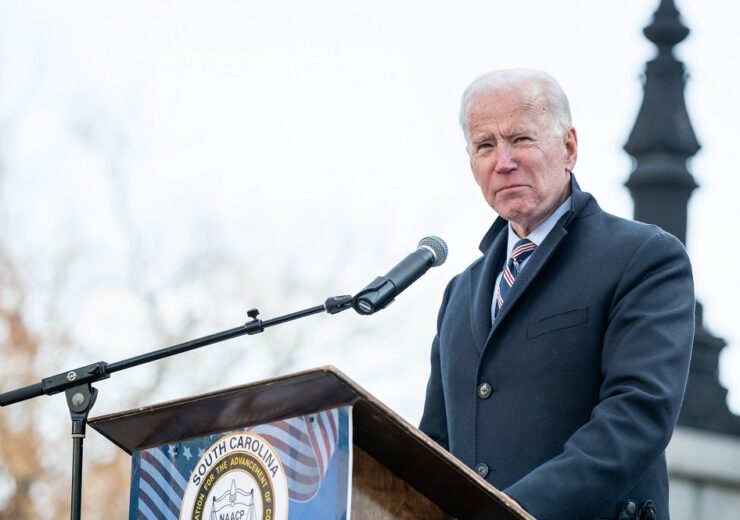 Joe Biden was elected on an agenda pursuing sweeping reforms to the US energy system (Credit: Crush Rush/Shutterstock)

US President Joe Biden wasted little time in moving to undo some of his predecessor’s signature actions – most notably for the oil industry a block on development of the Keystone XL pipeline and a ban on further lease sales in Alaska’s Arctic National Wildlife Refuge (ANWR).

Just hours after the inauguration ceremony yesterday at Capitol Hill, the new president issued a series of executive orders reversing hallmark policies of a Trump administration that had largely been a champion of industry and sought to advance oil projects in the interests of US energy independence.

Among the Day One actions was the headline re-instatement of the US as a participant in the Paris Agreement on climate change, a move widely-welcomed by global leaders and industry alike.

We’re back in the Paris Climate Agreement.

The American Petroleum Institute (API), an influential voice for oil and gas interests in the US, said it shares “President Biden’s goal of leadership in addressing climate change” and will “support the ambitions of the Paris Agreement” and global action to reduce greenhouse gas emissions.

The lobbyist group confirmed that natural gas will continue to be key priority for its membership as a transitional fuel while the world moves forward with electrification.

“Models show this agreement between nations cannot be achieved without access to natural gas, and that’s why we will continue to advocate for expanded US LNG exports as a path to transition countries toward cleaner fuels while ensuring millions of people in developing nations have access to electricity,” it said in a statement.

A more sensitive issue was the withdrawal of a permit, granted by former President Trump in 2019, for development of the Keystone XL pipeline, linking Canadian oilsands to refineries across the US Gulf Coast.

In 2015, then-President Barack Obama blocked the infrastructure project on environmental grounds, but the Trump administration reinstated the venture saying it would further the interests of US energy independence by reducing the need for imports from outside North America.

In his executive order revoking this permit, President Biden said analysis made in 2015 concluded “the significance of the proposed pipeline for our energy security and economy is limited” and would “undermine US climate leadership” by undercutting its credibility as it urged other countries to take action on climate change.

The near-2,000km-long pipeline would have stretched from oilfields in Alberta, Canada to a connection point in Nebraska, US, where it would join a pipeline network supplying US refineries around the Gulf Coast region.

The $8bn project was tipped to transport around 830,000 barrels of crude oil per day, and its construction – supported by the Canadian government alongside owner and operator TC Energy, was heralded as a major source of both revenue and job creation.

TC Energy said it was “disappointed” with the decision, adding it will now suspend the project and “consider its options”.

The API labelled Biden’s decision to block Keystone XL a “slap in the face” to union workers who had been contracted for its development, warning the “misguided move will hamper America’s economic recovery, undermine North American energy security and strain relations with one of America’s greatest allies”.

Kenney said in a statement: “As friends and allies of the United States, we are deeply disturbed that one of President Biden’s first actions in office has been to rescind the Presidential permit for the Keystone XL Pipeline border crossing.

“A decision has been made without even giving Canada a chance to communicate formally with the new administration. That’s not how you treat a friend and ally.”

The Alberta Premier called on President Trudeau to approach his US counterpart over the decision. “Failing an agreement with the American government, we call on the Government of Canada to respond with consequences for this attack on Canada’s largest industry,” he added.

Prime Minister Trudeau released his own statement on the issue, saying attempts had been made after the US election to “make the case” for the pipeline to high-level officials of the new administration.

He added: “While we welcome the president’s commitment to fight climate change, we are disappointed but acknowledge the decision to fulfil his election campaign promise on Keystone XL.”

Environmental groups welcomed the pipeline’s cancellation. Catherine Collentine, an associate director at Sierra Club, said: “Rejection of Keystone XL [is] a huge and hard-fought victory for our communities, clean water, and climate.”

Anthony Swift, Canada programme director at the Natural Resources Defense Council, added: “President Biden’s decision to reject the Keystone XL tar sands pipeline on its first day turns the page on a twelve-year fight over the energy future of our country and sets the stage for a more prosperous future powered by clean energy.”

Another notable policy reversal came with a temporary ban on new oil lease sales in the Arctic National Wildlife Refuge in north-east Alaska.

President Trump had succeeded where many others before him failed in opening up the protected federal land to oil and gas drilling, thanks to a provision for an auction process passed in a 2017 tax law.

The former president expedited this sale process during his final months in office, overseeing the first-ever sale of drilling plots in the region earlier this month – a move heralded by the federal Bureau of Land Management as “a hallmark step and a clear indication that Alaska remains important to meeting the nation’s energy needs”.

In his executive order, President Biden directed the Interior Department to “place a temporary moratorium on all activities of the federal government” relating to the leasing process, requesting a review of the scheme and a “new, comprehensive analysis” of its environmental impact.

While providing industry access to the ANWR – where decades-old estimates suggest there are almost 12 billion barrels of recoverable crude reserves – was a landmark achievement of the Trump presidency, the auction itself proved to be anti-climactic.

Just $14.4m was raised by a sale from which major producers chose to steer clear amid the financial constraints brought on by the pandemic and potential reputational issues associated with drilling in the region.

A total of 13 eligible bids were received, 11 of which came from the Alaska Industrial Development and Export Authority (AIDEA), a state government organisation which made the offers with a view to potential industry partnerships at some point in the future.

On 19 January, the US Bureau of Land Management issued 10-year leases for nine of the 11 successful bids, after AIDEA withdrew its interest in two of the tracts.

Adam Kolton, executive director of the Alaska Wilderness League, which is among a coalition of advocacy groups that have mounted legal opposition to the lease sale, said: “Alaska’s wild lands and waters were too often in the bullseye for an anti-conservation agenda these past four years.

“We are thrilled that the incoming Biden administration has placed Alaska’s public lands among its top conservation priorities. We look forward to working together to realise Alaska’s significant potential to protect America’s resources at the landscape level, a key strategy for safeguarding vital biodiversity and addressing the climate crisis.”

There was further intervention by Joe Biden to reverse the regulatory rollbacks of the Trump administration relating to vehicle fuel-efficiency standards and methane emissions across the oil and gas industry.

The relaxation of industrial and transport emissions rules was highly controversial, even within the industry, and attracted legal opposition from environmental campaign groups.

The most recent of these deregulatory actions came last August, when the Environmental Protection Agency (EPA) – now with new leadership under President Biden – finalised rules releasing oil and gas companies from the requirement to closely monitor and control methane emissions at production and processing facilities.

Transmission and storage operators were also freed from methane-specific regulatory controls, as well as wider air-quality standards governing the release of volatile organic compounds (VOCs) into the atmosphere.

Joe Biden has now directed the EPA to propose new industry regulations establishing strong standards for “methane and volatile organic compound emissions from existing operations in the oil and gas sector, including the exploration and production, transmission, processing, and storage segments”.

His order stipulates for this to occur by September 2021. The API said it will “work closely with the Biden administration as it conducts regulatory reviews that may impact our industry”.

Fred Krupp, president of the US-based Environmental Defense Fund, said: “Revising methane standards could bring quick climate benefits. Cutting methane emissions from oil and gas is the fastest and most high-impact way to slow the rate of global warming.”