Heating currently accounts for more than a third of Britain’s CO2 emissions, with 85% of homes heated by natural gas and just 5% using low-carbon alternatives 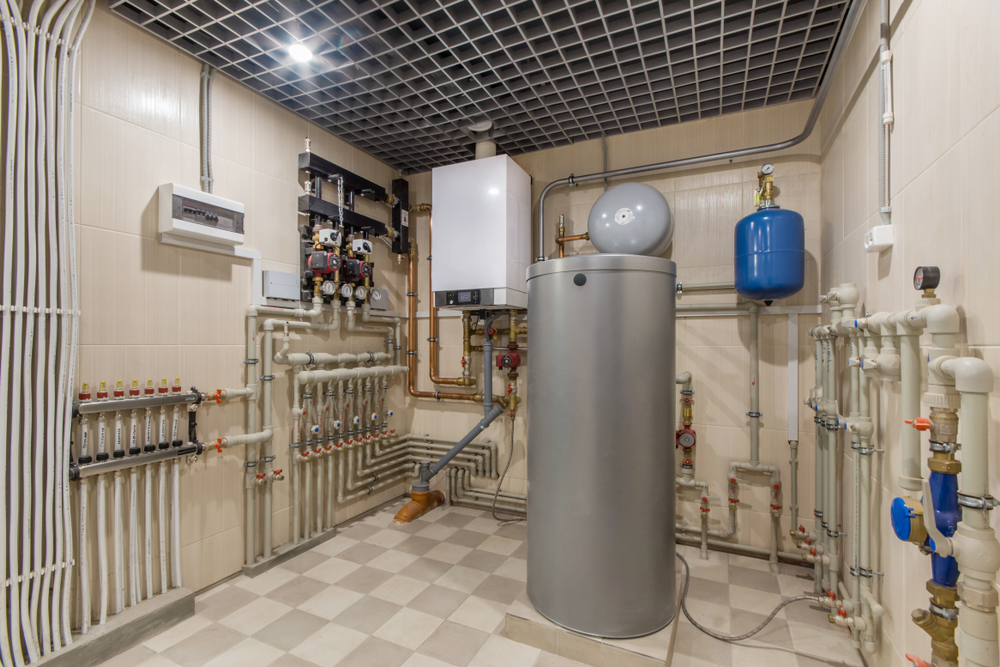 There have been various suggestions on the best pathway to decarbonise heating, whether it be electrification, low-carbon gas or hybrid models (Credit: Shutterstock/Alhim)

Plotting a path to decarbonise the heating network in the UK has been earmarked as one of the key steps in reaching the nation’s net-zero emissions target for 2050. Here, James Murray speaks to experts about the decarbonisation challenges ahead and the best available technologies for the industry.

The International Energy Agency (IEA) estimates that globally, about half of all energy consumption is used to provide heat, mainly for homes and industry.

Heating currently accounts for more than a third of Britain’s CO2 emissions, with 85% of homes heated by natural gas and just 5% using low-carbon alternatives.

According to the Department for Business, Energy and Industrial Strategy (BEIS), estimated emissions from the nation’s residential sector fell by just 17% between 1990 and 2019 – an emissions reduction that is not compatible with the net-zero ambitions for 2050.

There have been various suggestions on the best pathway to decarbonise heating, whether it be electrification, low-carbon gas or hybrid models, but no firm commitment has as yet been made on future plans to reduce the industry’s emissions.

Could heat pumps be the best option to decarbonise the UK heating network?

As part of Prime Minister Boris Johnson’s ten-point plan for a “green industrial revolution” that was released in November 2020, the government said it is aiming to make the nation’s homes, schools and hospitals “greener, warmer and more energy efficient”.

It claims this process will create up to 50,000 jobs by 2030, with a target in place to install 600,000 heat pumps every year by 2028 – a statement that could suggest electrification is leading the race as the preferred technology for the future of heating.

“If you burn gas in your boiler, per kilowatt-hour you emit 205 grams of carbon dioxide equivalent of gas,” says Jan Rosenow, director of European programmes at the Regulatory Assistance Project.

“Over the past decade, gas used to be quite clean compared to electricity, but now electricity has become so clean because of all the renewables, and using electricity makes a lot more sense than gas.”

A heat pump not only converts electricity to heat, it also uses electricity to extract heat from the air or the ground, providing between three to five units of heat – depending on its efficiency – for one unit of electricity.

“In energy terms, you’re using about a third or a quarter of what you would use in gas and, because it has a lower emissions intensity, you have massive carbon savings straight away – that’s why heat pumps are so attractive,” says Rosenow.

With the nation’s electricity grid becoming greener year-on-year and emissions expected to fall further over the coming years, households can secure “massive” energy and cost savings by converting to a heat pump, adds Rosenow.

By operating a system efficiently with a heat pump and taking advantage of time of use tariffs – when electricity is cheaper outside of peak hours – consumers can use as much as 60% less energy than a gas boiler and reduce their bills substantially.

Costs associated with heat pumps could be a stumbling block

Although heat pumps offer clear advantages to consumers and policymakers, the associated costs could prove a stumbling block in any attempt to rollout the technology at scale.

“There’s no reason why heat pumps need to be so expensive,” says Rosenow. “The only reason is because the market is currently small and hasn’t had enough innovation and enough uptake.”

About 1.6 million gas boilers are installed each year in Britain compared to just 22,000 heat pumps – but about one million heat pumps would need to be installed annually until 2050 to reach the UK’s net-zero target.

In a potential bid to bridge the costs and installation gap, the government made a tentative step to encourage more homeowners to install heat pumps in its summer 2020 economic statement.

Chancellor Rishi Sunak unveiled a £3bn ($4.1bn) energy efficiency plan for homes and public buildings, with £1bn ($1.4bn) set aside to make public sector buildings greener and £2bn ($2.7bn) worth of grants for homeowners to make “green” upgrades. Heat pumps were listed as one potential measure.

Key to getting the most out of a heat pump and ensuring houses are properly heated is ensuring they are well insulated.

But this is far from a given in the UK, which has some of the leakiest homes in Europe. Sunak’s energy efficiency plan aimed to help tackle this problem with a £2bn green homes grant that began in September last year and runs until 31 March 2022.

The initiative provides vouchers for homeowners and landlords to cover at least two-thirds of the costs of insulation and other necessary energy-efficiency measures.

In addition to government support, Rosenow says the UK could follow the example of countries such as Sweden, which have opted to make fossil heating more expensive by implementing a carbon tax on gas.

Another option could be to impose a regulatory backstop preventing households replacing a broken fossil heating system with another, with loans or grants to help lower-income households replace an old boiler with a renewable alternative.

Are hybrid heat pumps an option?

A hybrid heat pump system – where a smaller heat pump manages heat for 85% of the time but switches to a gas boiler during colder periods – has been touted as a potential option.

Centrica, the parent company of British Gas, has confirmed its near-term domestic focus will be on hybrid heat pumps as the best route to reducing emissions and providing “better customer outcomes”.

British Gas is currently conducting a two-year trial of the technology in 75 homes, where it is subsidising the £10,000 installation costs of the hybrid heat pumps, before it will later offer them to households for about a third of that price.

Rosenow believes it’s right to test out hybrid heat pumps, but this should only be where there isn’t potential for 100% electrification.

About 1.5 million properties have no connection to the gas grid and it would be “prohibitively expensive just to have a hybrid system in place”, he says. New buildings are “efficient enough” to have heat pumps and shouldn’t require hybrid systems, adds Rosenow.

What role does hydrogen have to play?

Over the past few years, gas companies have made it clear that they believe hydrogen has a role to play and that it could be a better solution to decarbonising the UK’s heating network compared to heat pumps.

There are currently various pilot projects ongoing to test whether you can repurpose the existing gas network to run 100% hydrogen through them for district heating.

The Iron Mains Replacement Programme has been about reducing risks from having old Victorian gas pipes and replacing them with modern pipes.

DNV GL principal consultant Corin Taylor says the advantage to modern pipes is that they are polyethylene, rather than metal, meaning they could “transport hydrogen without the pipes becoming all embrittled”.

There are also hydrogen boilers being developed, with safety tests conducted in homes to see how they could be implemented – something Taylor believes is “potentially quite an attractive option because all you’d really have to do in the home is change the boiler”.

But Paul Voss, managing director at Euroheat and Power says it’s “really just gas dressed up in new clothes”. “I think it’s completely crazy and deeply irresponsible to even talk about heating homes with hydrogen,” he adds.

Voss believes if the UK is serious about decarbonising heating, it needs a combination of mostly heat pumps and district heating. He says that with a district heating network there is an “economy of scale” and when you have the density that you get in the city, with lots of buildings close together, it “makes sense to use a network”.

Outside of cities, Voss doesn’t see a way around heat pumps becoming the “new boiler”. He claims it’s the “quickest and cheapest way” to decarbonise heat and, although that “doesn’t mean it’s going to be quick or cheap”, he doesn’t see an easier alternative.

He points to the Nordic countries as an example, with heat “essentially decarbonised in Finland, Sweden and Denmark” using a combination of heat pumps and district heating.

Centrica has confirmed that hydrogen is “part of the mix”, but admitted the technology is more than 10 years away from domestic use and that its costs are unknown.

“That’s the biggest gas supplier in the UK and, if they say that, we can’t have hydrogen feeding UK homes in 2025 – it’s a fantasy,” says Rosenow.

With industrial heating processes accounting for about 14% of the UK’s emissions, it is a sector that requires action.

While the jury’s out on hydrogen’s role in domestic heating, industry is an area where it could yet come to the fore.

With some manufacturers using high temperatures and others requiring a flame to come into contact with products, Taylor says it would be “hard to electrify” such sectors because it’s difficult to achieve the required temperatures.

He believes that’s where replacing gas with hydrogen “can be very useful because it could offer a route to decarbonising those bits of industry that’s hard from other routes”. He adds that hydrogen is “certainly a good option for heavy industry” because if you can figure out a way to decarbonise that industry directly then that could be “very beneficial”.

Working with industry, the UK government’s ten-point plan is aiming to generate 5 gigawatts (GW) of low-carbon hydrogen production capacity by 2030 for industry, transport, power and homes – and plans to develop the first town heated entirely by hydrogen by the end of the decade.

But, with energy efficiency methods and plans in place to rapidly increase the number of heat pump installations, Rosenow says the UK should “focus full speed ahead on energy efficiency and electrification” over the next 10 years.

“Yes, do some research on hydrogen and do pilot projects, but it’s a big bet to say hydrogen will solve our problems in 2040 and then not do anything in the meantime. I think that would be irresponsible.”