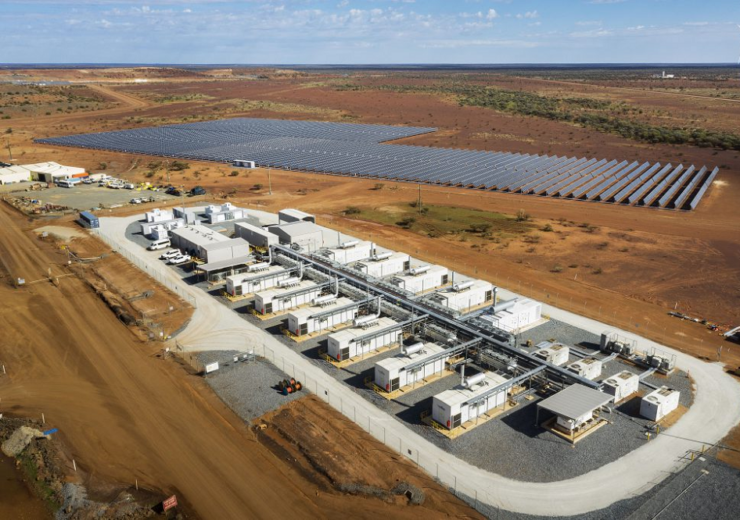 Energy storage is helping to balance the intermittency of renewables connected to Gold Fields' Agnew mine microgrid (Credit: EDL)

South African miner Gold Fields, and its independent power provider EDL, have achieved renewable energy penetration up to 85% under favourable weather conditions at the Agnew gold mine in Western Australia. A key element is an energy storage system, that forms part of a new hybrid power microgrid. Corentin Gaunand, Asia Pacific sales director at battery specialist Saft, explains how energy storage has contributed to Agnew’s success with integrating renewables.

Like many mining companies, Gold Fields is keen to decarbonise its operations by electrifying its equipment and engaging in the transition towards renewable energy. It is aiming to maximise clean energy as part of its electricity mix. This contrasts with the majority of remote mine operations, which currently rely totally on fossil fuels with no contribution from renewables.

However, with renewable energy from variable sources like wind and solar, sudden changes in output can lead to instabilities. Until recently, this has held the mining industry back from deploying renewables – but by integrating energy storage, it’s now possible to operate microgrids with renewable energy at the same high reliability as diesel generators.

The Agnew mine in Western Australia is a case in point. It lies 1,000 km north east of Perth and almost 400 km from the nearest large town, Kalgoorlie, making a grid connection uneconomic.

Remote mines traditionally rely on gas or diesel gensets for electrical power. However, to reduce reliance on fossil fuels, Gold Fields has invested €69m in a hybrid renewable energy microgrid. The site is notable for having five wind turbines, which make it Australia’s first mine to feature large-scale wind energy.

Renewable-energy penetration has reached up to 85% at Agnew mine

The 56 megawatt (MW) microgrid was developed in two phases by independent power producer EDL in less than a year, in spite of the twin challenges of Covid-19 and bushfires.

Phase 1 was completed in July 2019, with a 23 MW power station, made up of a microgrid controller overseeing nine 2 MW gas turbines, two 1.6 MW diesel gensets, and 10,710 Suntech solar panels.

The latter can generate a total of up to 4 MW and are equipped with cloud forecasting and sun tracking systems. This enabled the Agnew mine to meet 10% of its electrical demand with renewables.

When Phase 2 was commissioned in May 2020, the renewable penetration stepped up significantly to a daily average of 50-60%, although with the right weather conditions, it has reached as high as 85%.

This was thanks to the addition of five Goldwind GW140 3.57 MW wind turbines, with total generating capacity up to 18 MW. These make the most of wind, which primarily blows overnight, complementing power from solar panels during the day.

Phase 2 also saw the deployment of an energy storage system (ESS) based on Saft’s Intensium Max+ 20M containers with a total of 13 MW power and energy storage capacity of four megawatt hours (MWh).

The main role of the ESS is to maintain power quality and maximise the use of renewable energy. It provides the equivalent of ultra-fast-acting spinning reserves and diesel bridging. This protects grid stability and enables EDL to minimise the idle running of the gas and diesel gensets.

As a result, EDL is now achieving savings in fuel consumption and emitting 46,400 tonnes per year less carbon dioxide.

According to EDL, the performance of the microgrid at Agnew is meeting, and at times exceeding, its expectations.

The project has provided an immediate reduction in emissions from the supply of electricity to Gold Fields’ operations. Furthermore, it is anticipated that the renewable contribution will increase over the coming months as EDL fine tunes the control systems and makes further improvements.

The Australian Renewable Energy Agency (ARENA) awarded Gold Fields €8.3m of funding in recognition of its innovative commercial approach. The mine operator de-risked the technical and commercial aspects of the project by outsourcing the design, build and operation to EDL over a 10-year contract.

As a result, the project offers a blueprint for other mines and remote off-grid sites in Australia and beyond.

As it is a long-term contract, EDL holds full responsibility for system performance. During the design and implementation phase, this gave it the incentive to select suppliers for the key component parts of the microgrid based on their experience and track record of long-term operational success in similar environments.

When it came to energy storage, EDL wanted a system with high reliability and a long operational life. It recognised that this would minimise running costs and maximise availability.

The remoteness of the site and the desert climate of Western Australia present a challenge for battery technology. The environment experiences dusty and sandy conditions and extreme heat, with peak temperatures as high as 48˚C.

The ESS containers have an inherently rugged design and did not need modification to provide additional protection in the demanding desert environment. The ESS containers were fully fitted and tested at Saft’s manufacturing hub in Jacksonville, Florida, and were delivered via ship and truck, arriving ready to plug and play.

Another important consideration was that EDL wanted to minimise the need to send technicians to the remote site for inspection, maintenance or repair. Saft was able to provide reassurance as its lithium-ion battery technology is already proven for remote communities in the Australian Outback.

For example, the utility Ergon Energy is operating a fleet of Saft Intensium Mini Li-ion ESS units to support grid stability over long transmission lines in the state of Queensland, where reliability and availability are essential.

Another factor in EDL’s choice of Saft for the Agnew mine microgrid was the technical support and advice on offer from experts in energy storage. This included providing insight gleaned from the operating data of ESS installations around the world, as well as expertise in design and optimisation of the power conversion system (PCS).

Saft supplied the ESS for Agnew as part of a package that included the PCS, transformer and medium voltage switchgear. To maintain maximum uptime and availability, the ESS is equipped with diagnostic and communication systems for remote monitoring. Under a long-term service contract, Saft is providing remote supervision and regular onsite maintenance.

The containerised design offers Gold Fields the flexibility to relocate the ESS to another site in the future should its operational needs change.

There is a lot to learn from the experience in deploying a hybrid renewable energy microgrid at the Agnew gold mine.

Energy storage has clear potential for remote mines and industrial sites, particularly in increasing the penetration of renewables, helping operators to decarbonise and ensuring continuity of mission-critical operations.

The implementation of short-term, fast-reacting, high-power energy storage has been a critical element in addressing the variability of wind and solar resources, minimising diesel spinning and ensuring grid stability.

This has enabled Gold Fields to achieve its initial objective of meeting more than 50% of its electricity demand from renewables.

Field experience shows that grids can operate reliably with wind penetration as high as 80-85% if supported by well-designed energy storage. In order to operate continuously at such levels of renewable penetration, however, more capital-intensive long-term storage solutions are needed to time-shift energy from periods of excess production to periods of low production when demand is high.

Next steps for energy storage

The data and learnings from Agnew can also be applied to other operations. EDL has provided the feedback that Gold Fields sees the next step as deploying hybrid renewable microgrids at other mining or project sites, and that the key to commercial success is to think strategically in terms of a mine’s reserves.

One potential enhancement is to further optimise the design of the battery energy storage system. Having evaluated the first few months of operation, EDL sees the opportunity to further increase the penetration of renewables and reduce curtailment.

The Agnew mine has abundant wind resources, which produce around 20% more energy than it needs, particularly overnight. In order to take advantage of this, EDL could install longer-duration energy storage, possibly employing hydrogen, and provide additional inertia support.

What the Agnew mine project shows is that energy storage has great potential as a technology to boost the environmental performance of mines when installed as part of a renewable-connected microgrid. It is particularly promising for longer-life mines, as well as for sites where power can be sold on to external customers.