The feasibility study estimates that the project would require a capital investment of $430m for the pre-production works, and produce 219,000oz per annum over the remaining mine life of 18.5 years 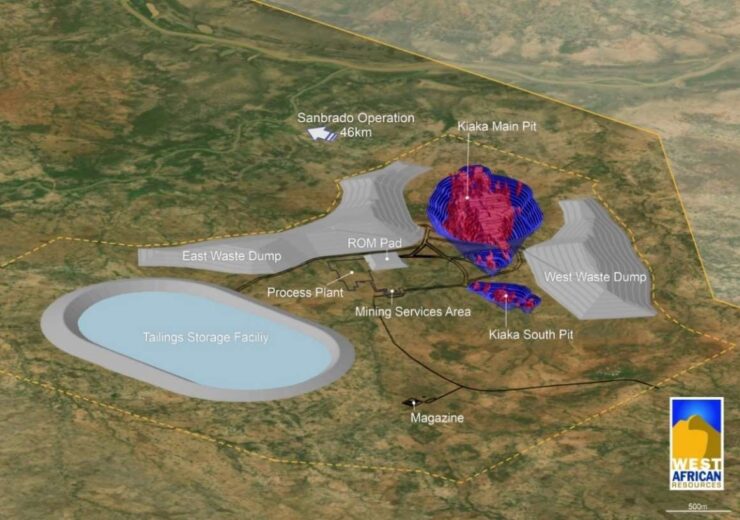 Perth-based gold company West African Resources has announced the results of a feasibility study for its majority-owned Kiaka gold project in Burkina Faso.

According to the feasibility study results, the project requires an estimated capital investment of $430m, for the pre-production works.

West African Resources executive chairman and CEO Richard Hyde said: “Our feasibility study for Kiaka shows it will be a long-life low-cost gold project averaging 219,000oz of gold production per annum for 18.5 years from 2025.

Kiaka is located 140km southeast of Ouagadougou, the capital of Burkina Faso, and 45km south of WAF’s existing Sanbrado Gold Mine.

It lies within a granted mining permit covering an area of 54km² that is 100%-owned by Kiaka, a company incorporated in Burkina Faso.

West African Resources owns a 90% stake in the project company, while the government of Burkina Faso owns the remaining 10%.

According to the company, operations ay Kiaka would support more than 1,200 direct local jobs and will serve as an important source of revenue for Burkina Faso.

WAF is planning to add a secondary crushing and debottlenecking of the processing circuit at Kiaka, to expand its production to more than 10Mtpa.

Hyde added: “We aim to fund the Kiaka development from internal cashflow and debt and have engaged leading debt advisory firm Orimco to assist with the banking process.

“Mining at Kiaka will be by conventional open-pit mining methods and the plant will have single-stage crushing and SABC milling with CIL processing designed to deliver 90% gold recoveries life of mine.

“Kiaka will access power from the Burkina Faso grid predominantly supplied by low-carbon hydroelectric power from Ghana and the Ivory Coast with large Burkina Faso low-carbon solar projects planned to come online early in the mine life to supplement the grid.”