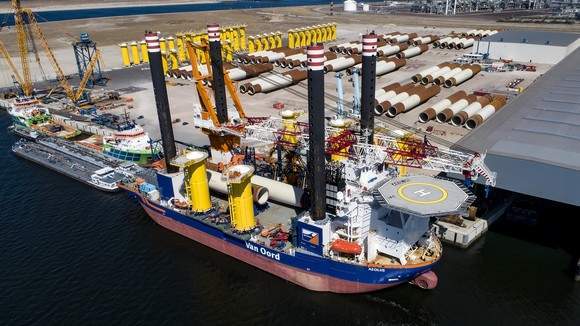 The Dutch offshore contractor said that Aeolus is back in the field following a major upgrade which involved boosting of its loading capacity, increase of its onboard accommodations and widening of its body. The offshore installation vessel’s deck has been reinforced and a new helicopter deck has been added.

Van Oord said that Aeolus now has a new crane with a lifting capacity of 1,600 tonnes that can handle the latest generation of wind turbines and foundations.

The Dutch company is the main contractor of the Norther offshore wind project and is responsible for the engineering, procurement, delivery and installation of the 45 foundations for the wind turbines. The company is also responsible for the offshore high-voltage station and the entire electrical infrastructure, along with installations of the wind turbines.

Apart from the Aeolus offshore installation vessel, Van Oord will also be bringing in its Nexus cable-laying vessel on the offshore wind project in the coming few months.

Expected to be commissioned in 2019, the Belgian offshore wind farm will generate 1,394GWh of electricity annually to meet the power consumption needs of about 400,000 households.

The Norther offshore wind project, which represents an investment of €1.2bn, is expected to create around 1,400 direct jobs and indirectly generate another 1,400 jobs for its construction.

The wind farm will be equipped with 44 wind turbines to be supplied by MHI Vestas, with each having a capacity of 8.4MW.

Also touted to become the largest offshore wind farm in the European country, Norther is expected to significantly contribute to Belgium in reaching its target of generating 13% of its energy mix from renewable sources by 2020.