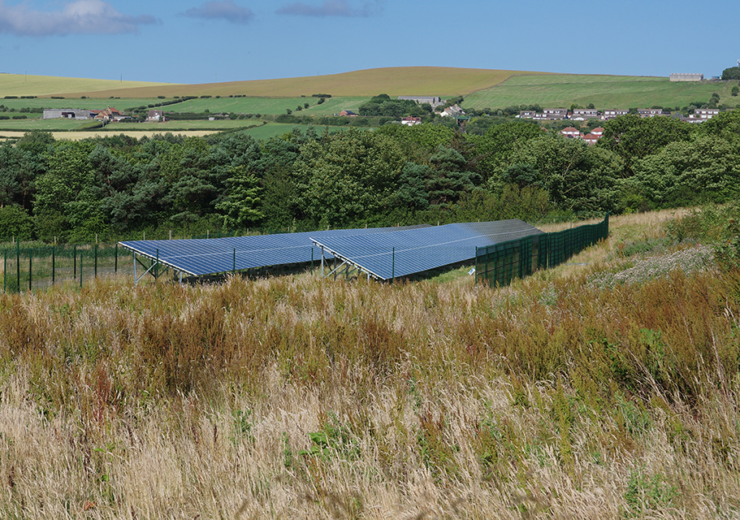 The solar array at Saltburn coal mine (Credit: UK government)

A UK government scheme to manage the energy costs of its maintenance of historical coal mining sites has reached a milestone in its use of solar power.

The Coal Authority today announced the completion of the first phase of its plan to power mine water treatment operations using solar energy, with nine such schemes having been brought online.

The programme, which began in 2016, is expected to offset annual expenditure on electricity at the former coal mines by £150,000 and reduce carbon emissions by 800 tonnes each year.

Coal Authority innovation manager Colin Lambert said: “It’s been three years since our first solar installation and in that time we have saved money and improved our carbon footprint through the schemes that met the financial and installation requirements at that time.

“We continue to investigate the viability of further schemes in order to meet our aim to significantly reduce carbon emissions and operational costs of treatment schemes through innovation, research and development.”

The Coal Authority is tasked with managing the impact of historical coal mining in the UK, including public safety and environmental issues.

Within this remit, it treats around 122 billion litres of mine water every year across 75 individual schemes to prevent local water supplies becoming contaminated with leftover materials such as iron solids.

The annual electricity cost of these activities, largely as a result of water pumping, runs to more than £3m, and the organisation has taken the approach of installing a series of solar arrays at the mining sites to offset the demand and climate impact of this electricity usage.

The latest project to be completed is a 101kw array located at the Saltburn mine in Cleveland, England and is expected to save £11,400 in energy costs each year, against an expected spend of £24,000.

Coal operations are being phased out across Europe

In 2015, the UK became the first country in the world to officially commit to phasing out its coal operations, just prior to the Paris climate meeting.

It has also pledged to cease all “unabated” coal generation by the same date.

Elsewhere in Europe, other nations have also accelerated their plans to end coal-related processes, with Finland and Belgium notable countries to commit to a coal-free future.