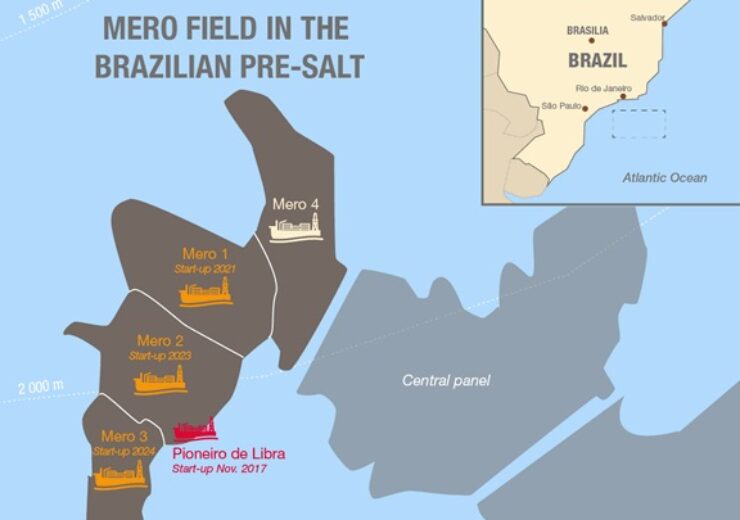 Total and its partners have made final investment decision (FID) for the third phase of the Mero project offshore Rio de Janeiro in the Libra block, Brazil.

Other consortium partners include Shell with 20% interest, Total with 20% stake, CNODC with 10% stake and China National Offshore Oil Corporation (CNOOC) with 10% interest.

Total exploration & production president Arnaud Breuillac said: “The decision to launch Mero 3 marks a new milestone in the large-scale development of the vast oil resources of the Mero field – estimated at 3 to 4 billion barrels.

“It is in line with Total’s growth strategy in Brazil’s deep-offshore, based on giant projects enabling production at competitive cost, resilient in the face of oil price volatility.

“The Mero project will contribute to the Group’s production from 2020 onwards, and we are targeting a production of 150,000 barrels per day in Brazil by 2025.”

Mero 3 FPSO to commence production by 2024

Planned to enter service by 2024, the Mero 3 floating production storage and offloading (FPSO) will have a liquid treatment capacity of 180,000 barrels per day.

Recently, Petrobras has signed a letter of intent (LoI) with Malaysian contractor MISC Berhad for the charter of a FPSO, Mero 3, to be deployed at the Mero field.

The FPSO will be interconnected with 15 wells through a subsea infrastructure comprising rigid production and injection ducts, flexible service ducts and control umbilicals.

The Mero field commenced pre-production since in 2017 with the 50,000-barrel-per-day Pioneiro de Libra FPSO while the Mero 2 FPSO is scheduled for commissioning in 2023.