The contract was signed in Moscow during the Russian Energy Week 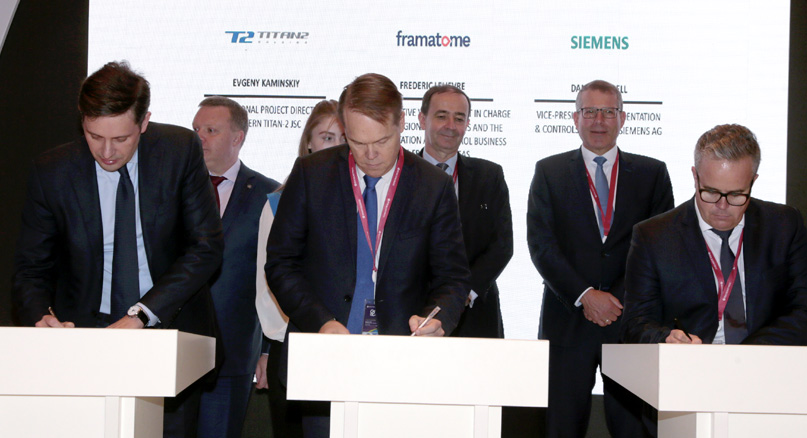 TITAN-2, the contractor for building and supplying equipment for Hanhikivi-1 nuclear power plant, has signed a contract with Framatome-Siemens consortium for the supply of main instrumentation and control (I&C).

The contract with the French-Russian consortium was signed following a competitive procedure that had seen participation of international companies operating in the field of integrated I&C solutions at nuclear facilities.

The technical management and integration of I&C-related works at the Hanhikivi-1 project will be handled by Rusatom Automated Control Systems (RASU), a subsidiary of ROSATOM in the field of I&C.

The contract was signed in Moscow during the Russian Energy Week in the presence of ROSATOM deputy director general for corporate development and international business Kirill Komarov along with Framatome CEO Bernard Fontana and Siemens power generation operations CEO Willi Meixner.

Under the framework, the primary task is to develop documentation required for project licensing.

The Hanhikivi-1 project will have 1.2GW of capacity

The Hanhikivi-1 project involves construction of a single-unit nuclear power plant and will feature Russian-designed VVER-1200 Generation III+ reactor with 1.2GW of capacity.

The nuclear power plant will be located on the Hanhikivi Peninsula in the Finnish region of Northern Ostrobothnia. At present, the project is in the stage of licensing and preparatory works at the construction site.

Finnish firm Fennovoima Oy is the customer, owner and operator of the nuclear power plant.

RAOS Project Oy, a subsidiary of REIN, which in turn is part of Rosatom, was selected as the engineering-procurement-construction (EPC) contractor for the project in December 2013.

Under the EPC contract, the Russian company is required to supply a licensed, functional and operational nuclear plant on a turnkey basis.

The main contractor of RAOS Project Oy is CONCERN TITAN-2, which is responsible for the design, construction and installation works along with supply of equipment for the nuclear plant.

Last May, RASU and Framatome had signed a memorandum of understanding (MOU) to enhance the cooperation between the two companies in the field of Instrumentation & Control (I&C).

The MOU provided framework for the participation of RASU and Framatome in water-water energetic reactor (VVER) and Framatome’s nuclear power plant projects in the global market along with cooperation in the field of maintenance and modernisation, training and development of nuclear infrastructure.