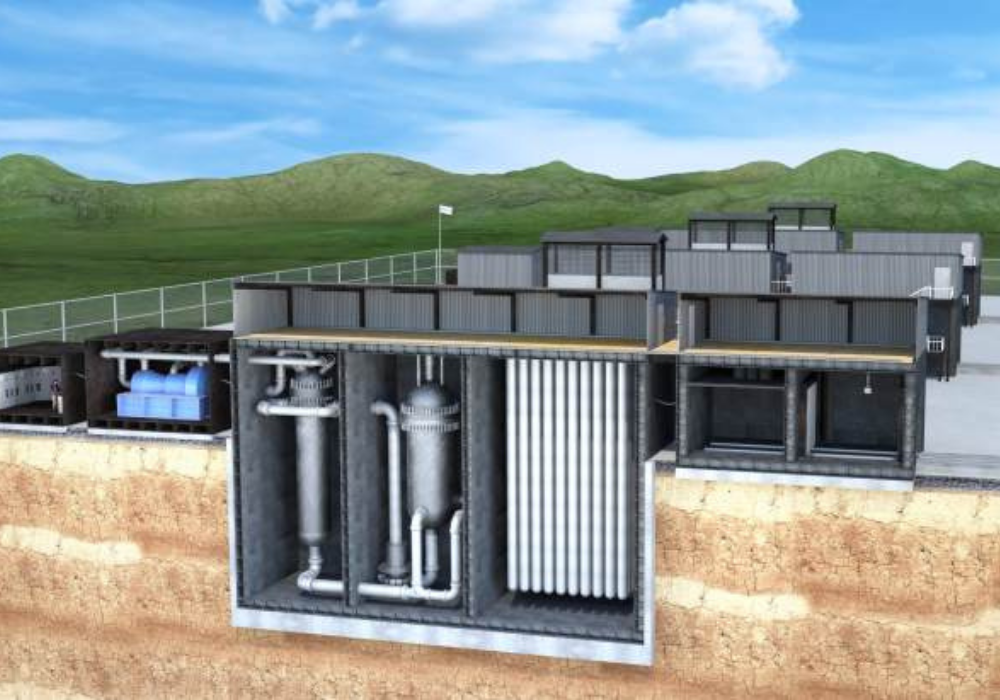 The U-Battery is being developed by Urenco in collaboration with Jacobs, Kinectrics and Laing O’Rourke (Credit: Urenco)

Companies across the US and UK have been pioneering some of the latest developments in small modular reactor (SMRs) technology in recent years. Here, Modern Power Systems tracks some of the industries most recent SMR advancements across those countries.

California-based Oklo Inc’s Aurora “fission battery” (4 MWt/1.5 MWe) is currently in Phase 1 of licence application review by the US NRC. The combined licence (COL) application, for a site at US DOE’s Idaho National Laboratory – the first ever for an “advanced reactor”, i.e. not employing water coolant – was accepted in June.

It is also the first privately funded application for a commercial (albeit small), advanced reactor, with Oklo currently anticipating it will be constructor and operator, as well as designer.

Heat is transported from the core “using heat pipes that function as thermal superconductors.” The reactor is located underground, while for the balance of plant, the plan is to use a power conversion system employing supercritical CO2.

“Although the current regulatory structure was developed over decades for large water-cooled reactors, the NRC is moving forward to review our advanced fission application’’ says Oklo. “We will continue to work with the NRC to ensure plants with novel characteristics can be effectively licensed.”

According to Oklo, its reactor “is being licensed to the same regulations but to a higher safety standard than traditional large power reactors”, noting that it is “fundamentally smaller and has inherent safety characteristics, and so can survive the most extreme events possible without danger to the public or damage to the environment.”

The company has received a site permit from US DOE for its demo plant to be located at Idaho National Laboratory – not to be confused with the NRC safety permitting, which is also required.

Also, through a competitive bidding process launched by Idaho National Laboratory in 2019, it has obtained access to “recovered material from used nuclear fuel”, which it plans to employ as fuel in its demo Aurora reactor.

The U-Battery, which is a high temperature gas cooled micro reactor, with installed capacity around 4 megawatts electrical (MWe) to 10 megawatts thermal (MWt), is being developed by Urenco in collaboration with Jacobs, Kinectrics and Laing O’Rourke.

It has received £10m ($13.1m) in development funding from the UK government under Phase 2 of the Department for Business, Energy and Industrial Strategy’s (BEIS) Advanced Modular Reactor Feasibility and Development project.

In Phase 1, eight companies were selected to provide feasibility studies of their advanced modular reactor (AMR) designs – each receiving contracts worth up to £300,000 ($393,000) – with three chosen to go through to Phase 2.

In Phase 1, U-Battery says it conducted a feasibility study that made the business, economic and technical case for the deployment of U-Battery in the UK and in Canada, where it would be deployed in industrial applications, mining sites and remote locations.

The study also demonstrated how U-Battery, which has been identified as a good potential source of low-carbon industrial heat, could support the decarbonisation of a number of the UK’s critical and strategic energy intensive industries, such as paper, glass, steel, ceramics, minerals and chemicals.

For Phase 2, U-Battery says it will use the government funding to initiate design and development work this year, contributing to the first of a kind deployment by 2028. It will be working to form new commercial partnerships to support this phase.

Jacobs has been selected by another UK-based SMR developer, Moltex Energy, to support work on its Stable Salt Reactor technology, a fast reactor employing molten salt fuel and molten salt coolant. Jacobs will build a bespoke experimental facility for thermal transfer testing at its Birchwood Park R&D facility in the UK.

Moltex Energy’s Stable Salt Reactor is designed, say its developers, to generate low cost electricity by burning processed spent fuel pellets which would otherwise have to be stored as radioactive waste.

To assist with validation of thermal transfer modelling, Jacobs’ chemistry, materials, engineering, instrumentation and modeling teams will collaborate to create a simulation that replicates the heat output of a fuel channel and to validate computational fluid dynamics modelling of the thermal transfer across the fuel assemblies into the coolant.

Moltex has been awarded more than $6m in funding from USDOE’s ARPA-E (Advanced Research Projects Agency-Energy).

Meanwhile, US-based Ultra Safe Nuclear Corporation (USNC) has contracted with UK-based Howden to design a helium circulator for use in its micro high temperature gas-cooled reactor, the Micro-Modular Reactor (MMR).

“Our contract with Howden is a strategic investment that marries the inherent safety of our MMR with proven equipment that will make the overall system simpler, less expensive, and more reliable,” said Mark Mitchell, president of USNC-Power.

Ultra Safe Nuclear will collaborate with the Howden engineering and design team to maximise heat transfer efficiencies, with a view to deploying the Howden submerged blower into the MMR project planned for the Chalk River Laboratories site.