How North America is revolutionising the adoption of small nuclear reactors

Canada launched a roadmap that supports the adoption of small modular reactors, while the US is starting to actively pursue advanced-reactor options 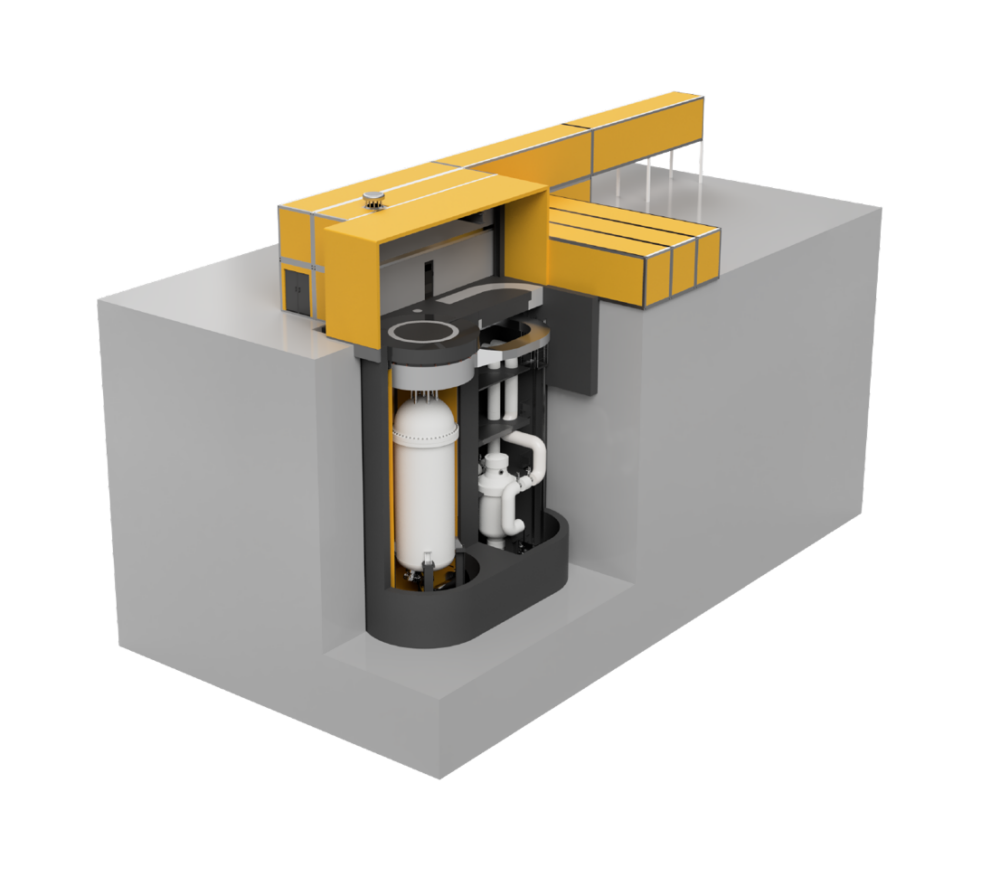 Steps to revolutionise the adoption of micro reactors and small modular reactors (SMRs) in North America are progressing at an increasingly rapid pace. President of USNC-Power Mark Mitchell explores how economic forces in both Canada and the US, combined with the intensifying objective of cutting carbon dioxide emissions, are making nuclear power from next-generation reactors a viable, near-term energy alternative.

Canada is leading the effort to review, license, and deploy micro and small modular reactors. Establishing a clear strategic path has been the hallmark of the Canadian effort to explore nuclear energy as a zero-carbon alternative.

Key to the Canadian government’s effort is a transparent approach, exemplified by the publication of a national SMR roadmap and proactive relationship-building with business leaders, nuclear-industry experts, utility companies, and local communities and the Indigenous groups that live within them.

Support for nuclear power has been rekindled in the US with several government acts, both approved and under consideration. These acts include:

The US is also starting to actively pursue advanced-reactor options with the launch of a bold plan called the Advanced Reactor Demonstration Program (ARDP). Initiated by the US Congress through the Department of Energy, this is designed to spur the construction of an advanced reactor demonstrator within the next five to seven years.

These proactive initiatives from North American governments are coupled with a noticeable uptick in public interest and budding support for nuclear power as an essential clean-energy source. Based on the combination of high-level governmental programmes and grassroots support, the likelihood we’ll see progress on proof of concept reactors has never been higher.

Negative perceptions of the nuclear industry have prevailed in the US over much of the past 40 years, driven in equal measures by ideological opposition to nuclear power, the prohibitive construction costs of new power plants, and high-profile accidents in the US and around the world. The favourable economics of natural-gas power generation and excitement about increased investment in renewables were also contributing factors.

Interestingly, the graduation rate for US students earning nuclear engineering related degrees serves as a proxy for the nadir in public opinion about nuclear technology. In 2000, fewer than 500 students graduated with a degree in nuclear power related fields, down more than 65% from the peak graduation rates 20 years earlier. Fortunately, enthusiasm for nuclear power has dramatically increased.

New entrants to the industry bring a different perspective on the need and potential of nuclear power. Inspired by the central role that nuclear power can play in mitigating climate change, a new generation of scientists and engineers is developing reactor designs that were previously discounted.

Canada started the trend for proactive exploration of nuclear solutions, guided by a realisation that nuclear will be extremely advantageous — if not absolutely necessary — in the country’s efforts to reduce carbon dioxide emissions. Nuclear power has been a less polarising issue in Canada.

In Ontario, for example, over the past 10 years, coal has been completely eliminated from the utility power mix, achieved through a combination of hydro and nuclear power. The result is noticeable improvements in air quality and other environmental factors in Ontario and neighbouring provinces.

Ontario’s strategy of including nuclear power in its power mix provided Canada with a template for a path to clean, low-carbon electricity. Through the government’s transparent process, as exhibited by Canada’s SMR roadmap, Canada built a broad base of support for SMRs.

Canada is also leading the way in developing a strategy for handling nuclear waste. For next generation nuclear reactors, the country is following a process similar to the one currently established for the disposition of nuclear waste generated by its currently operating reactors.

The Nuclear Waste Management Organization (NWMO), the Canadian agency tasked with developing the plan to dispose of nuclear waste, has been working with potential host communities to identify sites that are both technically suitable and amenable to a repository.

This is a unique, bottom-up approach for identifying and establishing a nuclear waste repository. The Adaptive Phased Management process has multiple possible host communities actively engaged in the process and working to identifying a preferred site.

The global nuclear industry is considering advanced reactors (AR) and SMRs as an avenue for new growth. Industry consensus is that ARs and SMRs are a great opportunity and a credible complement to large water-cooled reactors, as they open new markets for which traditional nuclear deployments are not viable.

More than 120 AR concepts are currently being promoted. About 65 of these are SMRs (including five micro reactors). The concepts cover a wide variety of technologies, sizes, and applications. Most of the concepts exist only on paper and are at low technology readiness levels. They require years (or decades) of concentrated R&D to realise.

• Advanced reactors: not cooled by water

• SMRs: smaller reactors with limited power (20-350 megawatts), designed to be partially manufactured in factories so the amount of site construction is decreased. May or may not be water cooled.

• Micro reactors: such as the Micro-Modular Reactor (MMR) being developed by USNC, very small (0.5-20 megawatts). Factory built and tested, deployed to site ready for install, substantially eliminating the need for site construction work. A typical micro reactor would fit on the footprint of a racquetball court and would be about 1/1000th the size of the current generation of reactors. These reactors are advanced reactors, ie not cooled by water.

Innovation in nuclear technology has been especially tricky as industry regulations designed for old reactor technologies and designs can be choke points for micro and small reactor alternatives. A lack of governmental support is effectively the same as active opposition.

The number of regulatory approvals and funding from developers required to move forward with even minor advances in technology requires political support. Governmental programmes exploring micro reactors and SMRs are starting to address some of these issues.

In addition, development of technological innovations requires significant sums of money. Returns on those investments will only be realised over extended timeframes. The simpler approach made possible by micro-sized and next-generation reactor technologies is beginning to convince the investment community that these projects will succeed, shown by significant investment in fission-reactor innovators such as Ultra Safe Nuclear.

Today, you need to be a sovereign state or a consortium of the world’s largest utilities to be able to afford a nuclear project. Those developing micro and other advanced reactors are working to change this. The objective is to be able to deploy micro reactors on a project-financed basis, similar to renewable energy projects.

The market will ultimately drive the success of any micro reactor technology. A robust business case is essential. Viable opportunities do exist. For example, the Ultra Safe Nuclear Corporation’s MMR (Micro-Modular Reactor) technology is being developed for use at remote mines and settlements in northern Canada where it can compete with the volatile cost of diesel fuel and the expensive methods for shipping that fuel to remote locations. One MMR would eliminate the need for 265 million litres of diesel fuel over the reactor’s 20-year life span.

As an industry, we are still assembling evidence that demonstrates the business case for advanced, micro and small modular reactors. The cost to develop and qualify the new technologies is still being assessed. The actual economics of the technology are yet to be proven.

The claims made by promoters of the technologies appear to be very optimistic and rely on mechanisms to achieve competitive economics that have never been achieved in nuclear power – namely simplification, mass production, and learning. This is the advanced reactor innovation challenge.

The USNC Micro-Modular Reactor is one of the many, varied approaches currently under development, but is showing signs of tangible progress. For example, Ultra Safe Nuclear and partner Ontario Power Generation are working through the Global First Power joint venture to deploy the first commercial Gen IV reactor in the world. The plan is to deploy this reactor at the Canadian Nuclear Laboratories’ Chalk River site in Canada.

Progress to date includes significant work to complete the design, licensing discussion with the Canadian regulator (the CNSC), steps towards securing a site, and initial establishment of a supply chain, including development of proprietary FCM fuel and sourcing of HALEU (high-assay low-enriched uranium).

The MMR is designed to adhere to current regulations and is optimised to allow quick adoption.

FCM fuel is a safer, incremental improvement on the standard TRISO fuel in graphite compact that has been used in high temperature gas-cooled reactors since the 1960s. The graphite structure is replaced with silicon carbide (also used in tank armour), delivering increased resistance to radiation and thermal damage.

MMRs using FCM fuel will not just meet regulatory limits but effectively eliminate nuclear risk from the reactor, fostering unparalleled public acceptance and market acceptance. Innovations such as this will open a path for deployment of nuclear reactors that pose no more risk than a wind farm.

Over the past 10 years, the cost of power from renewable generation – both solar and wind – has decreased by about five times. This is a trend that looks set to continue. Micro reactors are typically estimated to provide power at the same price point that renewable energy initially entered the market. The aim with micro reactors is to achieve the same downward cost trend as renewables.

What will we see as part of the new nuclear approaches to improving economics? Obviously, work to reduce the capital cost of nuclear plants will be significant. However, in contrast to today’s large reactors, where the cost of fuel, operations, and maintenance are negligible relative to overall costs, smaller reactors make it necessary to find ways to optimise these costs as well. Other tactics being actively considered include:

These approaches are expected to reduce development time and costs, as well as improve the overall economics of the plant.

The leadership demonstrated by Canada and the US is closing the gap with the current nuclear market leaders in Russia and China, positioning North America as a micro and small modular reactor powerhouse.