Alpha Gold is located where the projection of the Cortez gold trend, which hosts several multi-million ounce gold deposits, intersects with the Garden Valley Anticline 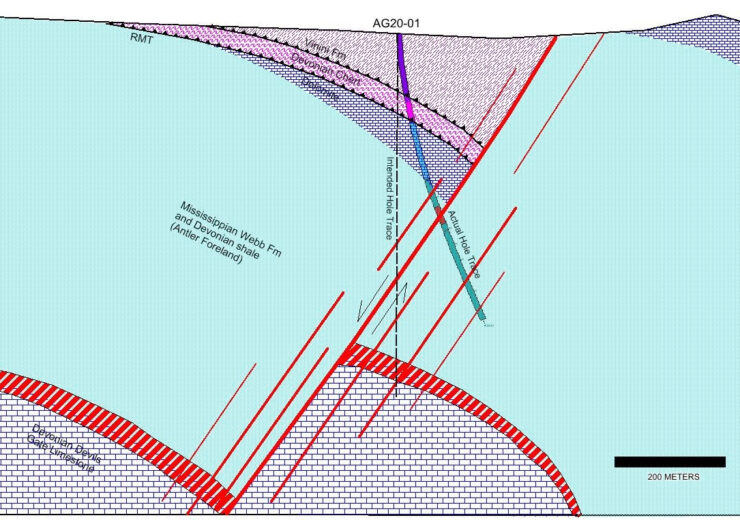 Sitka Gold Corp. (“Sitka” or the “Company”) (CSE: SIG; FSE: 1RF) is pleased to announce that it has completed its first deep drill hole at its Alpha Gold Property (“Alpha Gold” or the “Property”) located in Nevada’s prolific Carlin gold province.

Alpha Gold is located where the projection of the Cortez gold trend, which hosts several multi-million ounce gold deposits, intersects with the Garden Valley Anticline. Permits for a 12-hole drill program have been secured to test a Carlin-type gold deposit target at Alpha Gold where the prime Late Devonian carbonate host horizon is believed to be preserved at the contact between the Webb formation and the Devil’s Gate (Figure 1). The Webb-Devil’s Gate contact zone hosts McEwen Mining’s newly operational Gold Bar mine, located nearby on a parallel anticlinal trend, and is considered to be the most favourable host for gold mineralization in the Roberts Mountains. Mineralization hosted on adjacent and/or nearby properties is not necessarily indicative of the mineralization hosted on the Company’s property.

Cor Coe, CEO of Sitka, commented, “We are very pleased to have completed our first deep drill hole at Alpha Gold. We were able to penetrate a substantial amount of the targeted structure and the information gathered from this maiden hole appears to support our modeling, reinforcing the potential for Alpha Gold to host a Carlin-type gold deposit. We look forward to receiving the analytical results from AG20-01.”

AG20-01, the initial diamond drill hole at Alpha Gold (Figure 2), has been completed to a depth of 548 metres (1799 feet). The hole was successful in penetrating through the upper plate and intersecting a substantial amount of the Webb formation. Intense clay-alteration and shearing from 321.5m – 354.9m (1055ft – 1163ft) is interpreted to reflect a normal fault which offsets dolomite exposed on surface east of the collar by about 400m downward to where it was intercepted in the hole (Figure 1). The clay alteration overprints earlier sericite-pyrite-quartz alteration. Narrower zones of structurally controlled clay-sericite-pyrite and bedding controlled massive pyrite were also present in the hole. The drill hole penetrated enough structure that it should detect leakage anomalies if a significant Carlin-type system lies below.

The hole was stopped in Antler Foreland rocks (inferred Blue Hill Unit equivalent) beneath the Roberts Mountains thrust as eastward hole deviation had turned the hole to within 20 degrees of the bedding orientation (Figure 1). Information from the hole has greatly enhanced the geologic understanding of the project area and supports the Carlin-type gold deposit target concept.  Stratigraphy revealed in AG20-01 indicates the upper plate is completely eroded across part of the Alpha Gold Project, but the Antler Foreland sequence (Webb formation and Devonian shale) is much thicker than where it is exposed farther west.  Prospective areas for testing the top of the Devils Gate formation are interpreted to exist beneath AG20-01 in the footwall of the normal fault, and up dip to the west at the top of the Devil’s Gate Limestone. (Figure 1).

​All drill hole samples have been submitted for assay. Analytical results of both gold and pathfinder elements from this initial deep drill hole will greatly assist in positioning additional drill holes at Alpha Gold.