Located in German territorial waters with depths ranging from 23 to 44m, the wind farm is about 40km east of Møns Klint 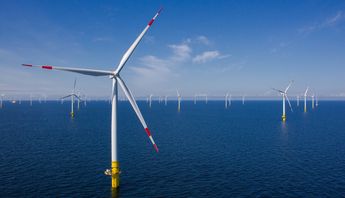 One of Germany’s largest offshore wind farms in the Baltic Sea, EnBW Baltic 2, is to be serviced from August 2020 from the Danish port of Klintholm on the island of Møn. Until now, the company’s service team – up to 25 in number – have travelled from Rostock to a hotel vessel close to the wind farm. A hotel and a service building are now being constructed in Klintholm, from where the employees will be ferried to the wind farm in the mornings and evenings during their two-week duty roster. “The proximity to our wind farms offers us unique opportunities here,” said Kent Hougaard of EnBW Offshore Services Danmark (EOS).

The 80 Siemens SWT-3.6-120 wind turbines have been supplying some 340,000 households with renewable electricity since 2015. Located in German territorial waters with depths ranging from 23 to 44 metres, the wind farm is about 40 km east of Møns Klint, close to the meeting point of the Danish, Swedish and German maritime borders. Klintholm in Denmark is nevertheless better situated for servicing the turbines than any German port. EnBW, their operator, will consequently be relocating a large part of its operating team from Rostock to Møn. “We expect noticeable savings and synergies as the journey from Klintholm harbour only takes just over an hour,” explained Kent Hougaard. Baltic 2 continues to be controlled, however, by remote data link from the control room in Barhöft, Mecklenburg.

For most offshore wind farms, service teams are flown in by helicopter either on a daily basis or for two-week stays on a hotel vessel. “With a trip time of only just over an hour, accommodation on land is far more cost-effective,” explains Kent Hougaard. Klintholm is consequently ideal as a service hub for wind farms in this part of the Baltic Sea.

The German technicians continue to be ferried from Rostock for their two-week tours of duty. From August, however, rather than disembarking onto a hotel vessel, they will be brought to the idyllic Klintholm on the Danish island of Møn. They will commute from the port on Sun Light and Moon Light, two crew transfer vessels (CTVs) chartered from a Dutch shipping company.

The hotel to accommodate the service team is scheduled to open in August. The service building in the port area is scheduled for completion as early as July, when the first spare parts will be taken into storage there. Both buildings are rented out under contract for at least ten years, thus ensuring a long-term commitment.