The North-Kara drilling project was aimed to collect samples of core, which is a rock material that is said to be a direct source of geological data 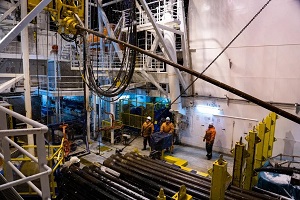 Rosneft Oil Company has conducted what it claims to be the first in the Arctic surveys to drill shallow stratigraphic wells in the north Kara Sea.

The North-Kara drilling project, which has been carried out using Bavenit survey drillship, was aimed to collect core samples.

The company said that the core rock material is a direct source of geological data, which would help in assessing the age (stratification), composition and conditions of formation for Arctic shelf rocks.

In a statement, Rosneft said: “The samples recovered are of great interest for the purpose of obtaining the latest data on the geological structure and oil and gas potential of the North-Kara basin.”

During the expedition, the company drilled eight wells to a depth of 90m while the fieldwork was conducted in compliance with the environmental safety and environmental protection standards.

Rosneft said it has collected a total of 6.5 tonnes of core samples and tested drilling technology in deposits with varying properties, such as rocky terrigenous and carbonate ones, as well as in more challenging dispersion and semi-core deposits.

The company: “A series of analytical studies will improve the reliability of forecasts of the oil and gas potential of the Arctic’s sedimentary basins of varying ages and provide a new geological model of the North-Kara region.”

The firm said that the experience gained during the expedition provides the basis to develop technologies for the effective Arctic shelf study.

As the largest license holder for continental shelf areas, Rosneft is implementing a comprehensive long-term research programme in the Arctic.

Last month, Rosneft United Research and Development Centre, the institute of the corporate R&D complex of Rosneft Oil Company, announced the development of a laboratory unit for synthetic crude oil.