Russia’s Rosatom has completed the assembly of the turbine island main equipment at Unit No 2 of the Leningrad nuclear power plant 2 (LNPP2) 2 which is being developed next to the existing Leningrad NPP in the town of Sosnovy Bor in Leningrad Oblast. 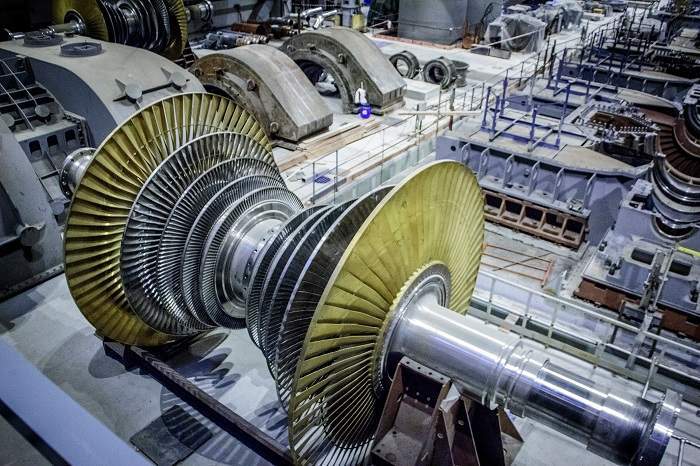 Assembly of all the main equipment of the turbine building has been completed at the construction site of the power unit No 2 of Leningrad NPP, the firm said.

“The turbine shaft has been aligned; three travelling cranes have been successfully operated. Four places of the turbine building, which total area is almost 25 thousand square meters, are filled with more than 5 thousand tons of pipelines and almost 4 thousand units of valves that are being assembled.”

The LNPP2 will replace the existing RBMK-1000 type reactors at the Leningrad NPP which are nearing the end of operational life.

The first unit of the LNPP is estimated to last until 2018 and the second unit until 2020. The third and fourth units are expected to run until 2025.

As a result, four upgraded VVER-1200 water-moderated reactors are planned to be installed at LNPP2.

The first unit of replacement capacities with VVER-1200 reactor is at the start-up stage while the second VVER-1200 type unit is under construction.

A total of 71 technological systems are planned to be located in the turbine building of the LNPP power unit No 2 with the VVER reactor 120, the Russian firm said.

“The site uses the most advanced methods of work. In addition, all the workers at the facility have experience of effective cooperation and successful implementation of similar operations at the power unit No 1 with the VVER-1200 reactor, which is currently at the final stage of commissioning. All this allows not only to stay on schedule, but in some areas even to reduce the time.”